Fear and Loathing the Adaptation: Rum Diary Fails to Impress 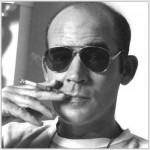 With the recent release of The Rum Diary receiving a somewhat cool reception, (52% on Rotten Tomatoes). Hunter S. Thompson’s novella, The Rum Diary follows his exploits working for a newspaper based in Puerto Rico. For those of you who are unaware of Thompson’s style, it was often urgent, gritty and politically charged. In some eyes, the man was an innovator and a genius who revamped journalistic writing. So why the cold critical reception of the recent adaptation?  Rotten Tomatoes have stated that ‘The Rum Diary fails to add sufficient focus to its rambling source material’.

Brian Robinson, who adapted the screenplay, had relative success with Withnail and I back in 1987, yet his latest works seems to lack a sense of cohesion.  This lack of cohesion does not exist so much in the content but in the style of the film. I felt Robinson had completely misunderstood or even overlooked the feel of The Rum Diary. I also felt that the cinematography failed to interpret the atmosphere created in the book, instead offering us what one critic called,‘Thompson’s whole vision of journalism, glossed and made plain by Hollywood’, and I could not agree more.

The disappointment instilled in me gave way fear, as one of my favourite novels, Jack Kerouac’s On the Road has recently been adapted and is due for release. With Francis Ford Coppola behind the wheel, one does try to cling on to hope for this project, but it does seem to have fallen off the filmic radar. Although time will tell with this, all of us literature fans will wait in reeling disappointment, ready to receive more.