Buttercup Bill gets release in August 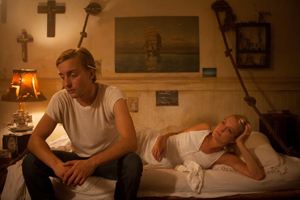 Trinity Film have announced that it will release BUTTERCUP BILL – the highly-anticipated debut feature from New York film-making duo Remy Bennett and Emilie Richard-Froozan and the first production of Sadie Frost and Emma Comley’s new outfit Blonde to Black Pictures in August 2015 in the UK.

Billed as a “Southern Gothic Romance” this impressive debut is teeming with authenticity and with an incredibly compelling central performance from actor/co-director Remy Bennett (grand-daughter of Tony Bennett).

Having premiered at New Orleans, Raindance and MARFA film festivals, Buttercup Bill tells the story of a twisted romance between lifelong friends Patrick (Evan Louison – Not Dark Yet, Mariah, Blindsided) and Pernilla (Remy Bennett – The Wolf of Wall Street, Boardwalk Empire) – mutually obsessed, but clinging on to dark secrets. Travelling from the seedy, neon-lit New York bar scene to a nameless town in the sweaty and whisky-soaked Deep South, Pernilla seeks comfort from Patrick after the suicide of their childhood playmate. At first innocent and playful, their chemistry soon gives way to subversive games of sexual jealousy, making unwitting pawns of those around them. As the lines between love and cruelty, and fantasy and reality become blurred, the question looms large: can they ever be together? Should they?

Co-founder/ director of Trinity Film, Cedric Behrel said: “Once again we’re proud to present another exciting debut by talented, promising and all-female film-makers such as Remy, Emilie, Emma and Sadie. Whether in breakthrough films like Import/ Export or Incendies, or debuts such as The Comedian and Involuntary, we have always been motivated by discovery and offering the audience something bold, uncharted and that carries an element of fear and desire, and Buttercup Bill is just that.”

Sadie Frost and Emma Comley from Blonde to Black Pictures said: “We are thrilled to be partnering with Cedric and Trinity for the release of our first feature “Buttercup Bill” in the UK this Summer. Trinity is the perfect fit for Blonde to Black and Buttercup Bill; they have released some of our favourite movies by some great directors, we love the ethos of the company and it feels like a natural union”

BUTTERCUP BILL will be released in Cinemas, On Demand and DVD in August 2015 (date tbc).