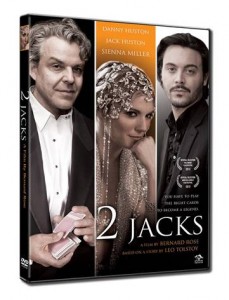 2 JACKS is the story of the legendary film director Jack Hussar (Danny Huston), notorious gambler and womaniser, who returns to Hollywood to raise financing for his next film. During a whirlwind night on the town, Jack seduces the stunning Diana (Sienna Miller).

Years later, Jack Hussar Jr. (Jack Huston) arrives in Tinsletown for his directorial debut and Diana (now played by Jacqueline Bisset) finds her daughter falling for her former lover’s son. As Jack Jr. struggles to follow in his famous father’s footsteps, his impulsive, hell-raising actions are about to teach him a life lesson he’ll never forget…

Bernard Rose reveals: The film is loosely based on the Tolstoy short story THE TWO HUSSSARS, and has, at its core the struggle of a son trying to follow in the footsteps of his famous father. As the two men’s separate but similar life experiences unfold, we see that even though time and culture changes human nature does not. TWO JACKS is fundamentally about how our romantic vision of the past can prevent us from  living authentically in the present”.

The film will be released in the UK on DVD and Download simultaneously on June 29, through TriCoast Worldwide, Movie Partnership (Digital) and Fusion Media Sales (DVD).