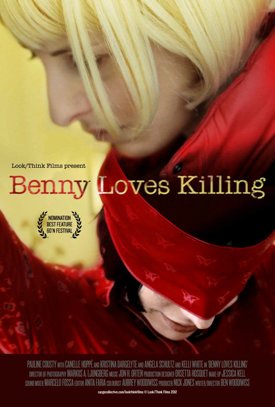 Benny Loves Killing is the first feature film from Look/Think Films, an independent production company with a difference. The film is about a French student living in London who is making a horror film as her final dissertation at University. This flies in the face of everything she is supposed to do, but she insists on doing what she wants to do. As the film progresses, it begins to develop into a claustrophobic character study of Benny as she begins to destroy everything around her. Or does she? The film has a Rorschach inkblot of a narrative, allowing viewers to reach different conclusions about Benny.

The film won a string of awards and nominations on the festival circuit, and built up a healthy reputation as a film for cineastes. And it wears this reputation proudly. Put simply, the film is a call back to a more complex, yet pure brand of cinema, and has been compared to the work of the Dardenne brothers and Cassavetes, which should give you a good idea of how the film feels. This is difficult, exciting, vital cinema that has a hell of a bite to it, and it’s a definite shot in the arm for UK cinema.

It has recently been released in a first run on Vimeo on Demand, and will be available on more platforms in the future. Check out the trailer today, and help spread the word about this exciting new Indie film: