A History of Film in Lisbon
Home
News

A History of Film in Lisbon

After The Night (Ate Ver A Luz) is a striking indie gangster story set in the gritty slums of Lisbon and is out in UK cinemas and VoD from the 25th April.

A visually striking film, it accurately shows Lisbon’s diverse culture, people and surroundings and climbs inside the world of Lisbon’s Creole slums. 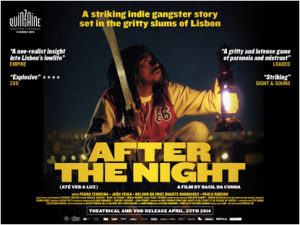 An outcast living a solitary nocturnal life with an iguana named Dragon as his only friend, Sombra wanders around in the Creole slums of Lisbon as he is looking for cash to pay back the local gang boss. Dragged into an armed robbery, he runs away and is chased until the early hours of the day.

For some thought-provoking, for others dull – this movie reveals the encounters of a mother and daughter on a Mediterranean cruise. John Malkovich is the captain.

This award-winning, warts-and-all documentary/fiction provides a close-up of the lives of Cape Verdean slum dwellers and drug addicts in Lisbon’s deprived Fontainhas district.

Passion, futile love, adultery, tragedy, piety… It’s all in this Oliveira classic that won the Jury prize at Cannes.

Stars Jonny Depp as a rare book dealer seeking out a supernatural demon text. In the course of his travels around Europe through France and Spain, to track down the authentic copy of the book for his client, he visits Sintra in Portugal. It’s a picturesque area of Portugal just outside Lisbon with plenty of atmospheric hilltop palaces and castles.

A grim and gripping tale of life in the slums on the outskirts of Lisbon, dealing with poverty, suicide and the struggle of love and death. 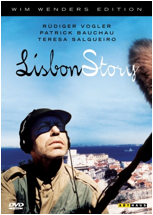 Inventive and beautifully photographed, this German drama follows director Monrow on his quest to finish a silent film in Lisbon. Stars Portuguese band Madredeus and a cameo by Manoel de Oliveira. 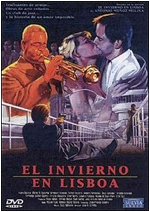 This crime drama is about a disillusioned US jazz pianist who fl ees to Lisbon where he befriends an artist. The film stars famous trumpet player Dizzy Gillespie.