5 Of The Best Driving Films Ever 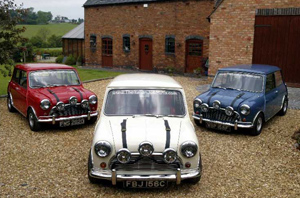 The car has featured heavily in many classic films – even to the point of becoming the actual ‘hero’ itself in some pictures. Many can remember the classic ‘Herbie’ films featuring the VW Beetle with a personality, and certain films either have a full ‘driving theme’ or iconic driving passages such as the remarkable car chase in 1971’s ‘French Connection’.

Some capture the imagination in such a vivid way that they inspire us to learn to drive as soon as we can possibly start learning the rules of the road and preparing to get behind the wheel ourselves.

Picking five definitive driving films isn’t easy as many are subjective, but we reckon this five deserve their place among the very best:

The central car chase through the hills of San Francisco, with Steve McQueen at the wheel of a dark green Ford Mustang, is, approaching 50 years later, still considered a reference point for all other filmic car chases.

For many it’s still as fresh, gripping and vibrant as it was when first seen in cinemas back in 1968, and the throbbing engine note of the Mustang is a key takeaway from this film for many, and likely caused some to hanker after the open road.

The white Dodge Challenger is the central to this iconic driving film. Barry Newman’s fast cross-country road trip with the police in hot pursuit boasted stunt work and gripping action aplenty from director Richard Sarafian to create a film that became something of a cult road movie.

Along with the chase, the film is noted for the director’s feel for capturing landscapes.

This 60s classic has become one of the most loved driving-related films of them all and featured Michael Caine, Noël Coward, Benny Hill and Robert Powell in a madcap robbery caper. Perhaps the real stars were the vehicles – in particular the Mini Coopers seen zipping around the streets, roofs and even stairways in Turin and a coach that ends up balancing precariously in what is literally a cliff-hanger ending.

Despite the exposure and marketing potential, BMC (makers of the Mini at the time) wouldn’t donate any cars to the film makers, and Michael Caine didn’t have a driving licence – look carefully and it’s clear he doesn’t actually do any driving.

The film was remade in 2003 featuring the more recent BMW-designed MINIs.

This Martin Scorsese film – with a New York yellow cab as the ‘star car’ – is very much a driving movie classic. The taxi is the personal world of cabbie Robert DeNiro, who travels around the city with the less glamorous side of New York depicted through the car windows; the dank and dark streets as opposed to the bright lights of the picture postcards.

The film confirmed De Niro’s status as a true acting heavyweight following his role in ‘The Godfather’ and made a star out of a young Jodie Foster who steps into his insulated world in the cab.

Considered a classic road movie, it’s an unusual one in that it deals extensively with the sheer loneliness and intimidating scope of mile after mile of driving on Route 66. Director Monte Hellman’s widescreen composition was in no small way a factor in creating atmosphere, and it’s a beguiling film many have seen again and again.

It combines some wonderful driving sequences and great acting performances, and is a thoughtful study of codependence, competition and alienation.

Several more famous road films could feature at the top of anyone’s list: ‘Thelma and Louise’ from 1991, ‘Christine’ from 1983, ‘Dirty Mary, Crazy Larry’ from 1974 and the influential 1953 classic ‘The Hitchhiker’ to name a few.