Super Everything* by The Light Surgeons, Hackney Empire – Review

Super Everything asks a timeless question about who we are as individuals and as a society. It is a exploration of our relationships with each other and our environment, and a survey of our everyday rituals that reveals what unites and divides us as human beings.

Super Everything* is the brainchild of East London collective The Light Surgeons. It is an immersive documentary fusing live cinema with electronic music, Malay Gamelan and Chinese drumming, all enhanced with live performance by adventurous string players from the Heritage Orchestra ( who were previous collaborators with Aphex Twin for his Remote Orchestra project).

The Light Surgeons have long been pioneers of the audio-visual movement and in particular, extending the boundaries of immersive environments. First seeing these guys over ten years ago at The Big Chill Festival, it was clear that they knew exactly what they were doing. They performed a remix of an old movie called The Fountainhead. They re-told the story by playing out the important scenes from the film and filling in the gaps in between with colours, shapes and other graphics to reflect the mood of the characters and the changes in the plot. Simply put – genius.

In recent years, and after much critical acclaim and touring around the world their shows have become increasingly more immersive. There was a show a few years ago now at the IMAX in Waterloo. Huge multiple screen projections. On top of that were slide projectors, adding extra depth to the image. The show was very similar to this new one about Malaysia – except it was about the US of A.

The last performance was again, a similar style of project – LDN:REDUX… all about our glorious city of London. It was performed around the world and also as part of the fantastic Hackney Film Festival. Always a good event for these types of works.

The latest project builds on the success of these previous shows but it now focused on Malaysia. Exploring the relationship between identity, ritual, and place and progress across Malaysia; the overlapping dynamism of the themes is reflected in The Light Surgeons’ melding of recorded and impromptu music with live video manipulation, motion graphics and traditional Malay shadow puppetry. 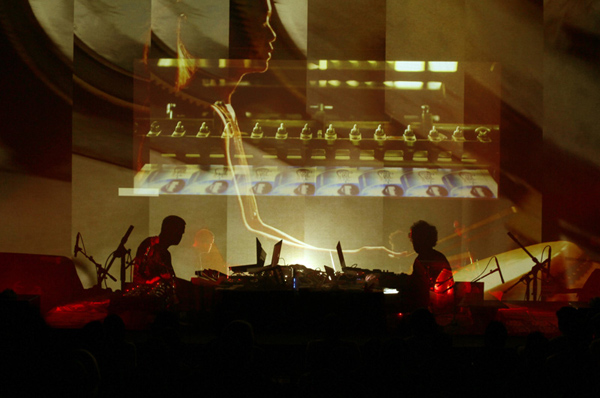 Photos courtesy of The Light Surgeons

The visual experience is created across multiple layers of screens using the latest in projection and projection screen technology and a quadraphonic sound system. Images and videos are split across these screens are layered, looped and edited live, creating works that can be performed as unique interpretations each time.

This particular show was a special one for these guys as it was in their own backyard. Always a special moment for any artists to return triumphant to a big venue in their hometown with a packed house full of friends, colleagues and family members.

The level of detail that they now achieve in their shows is truly inspiring. Not happy with just making beautiful visuals, projecting onto multiple layers of screens, they also utilise other senses such as smell. At one point in the show, burning incense was blown around the venue from the front of the stage adding a 4th dimension to proceedings if you like. Reading a review of an event such as this just does not do it justice. The video above will come a little closer but to sure – check out their schedule and go and see it live for yourself!

Another solid performance from Mr Lyons. Now based in Berlin, he does not do many shows in the UK. Here’s a little taster of his lovely work.