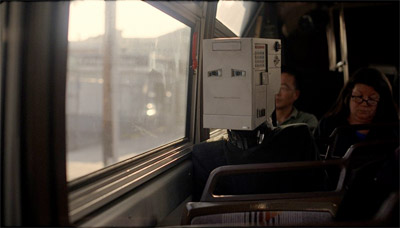 I was lucky enough to be invited to the UK Premiere of Spike Jonze’s latest venture – I’m Here. It’s a short film, 29 minutes funded by Absolut vodka. The screening took place in the basement of an NCP car park in central London. The setting didn’t sound very glamorous for a premiere and despite queuing up in the rain i was excited all the same.

On entering the venue, it had an almost illegal rave feel to it. A stripped out car park, fog machine, blue lights around the walls and very cool looking props dotted around. The main floor area was dressed with cardboard boxes with plugs coming out of them. What could they be? Nobody seemed to want to investigate, just happy to wait for them to unfold… and unfold they did, literally. The power was turned on and the plastic inside the boxes began to inflate and turned out to be nice airbeds for everyone to sit down on. Great! I thought we were in for a standing performance. Of course there were also some free vodka based cocktails to enjoy, and so we were all set!

For photos of the event, check out friend of FRR, Craig Grobler’s photostream on Flickr.

I was actually seated as pretty much the closest person to the screen and dead centre, so i’m happy to live up to our name and give you a review from the Front Row!

I have been a keen Spike Jonze fan since his early days as a music video director. His work has been creative and solidly reliable throughout his career. After his recent success with Where The Wild Things Are i was interested to see what could be achieved under the Absolut banner. According to reports they were pretty much ‘hands-off’ during the process and allowed Spike to do what he wanted.

The film in a nutshell is about 2 robots that fall in love. The first a guy, Sheldon played by Andrew Garfield and the female love interest, Francesca played by Sienna Guillory. Sheldon is the quiet bumbling librarian type, following the rules and living out a pretty lonely and sad existence. The film begins by giving the impression that the robots are the underclass in society and had a vibe of robo-racism seeping through. One day at the bus stop, Sheldon meets the rebellious Francesca who happens to be driving (something the robots are not allowed to do). From here the film follows their story together and the happiness they enjoy while spending time with each other. Inevitably things start to go wrong and Sheldon ends up sacrificing various body parts to keep his love alive.

It’s really about the devotion for each other that love can bring. I enjoyed it very much, the story was a conventional one but told in a way you’re unlikely to see anywhere else. Spike Jonze has a magical way of portraying odd characters yet instilling them with emotion. Its not your typical sci-fi piece where you wonder about robots having feelings and all the deep meanings associated with that (Do Androids Dream of Electric Sheep?), its a surreal world yes but with a familiar love story. The film is beautifully shot and full credit to all involved, i understand Method Studios are responsible for the CG work. It might not be dark enough for many people but the story is told with good humour and has a very cool look.