Originally a work called ‘Horizon’ was scheduled to be in this space but changed at the last minute. 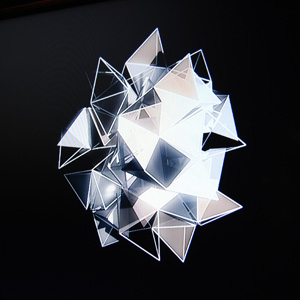 onward was set up in the main gallery space on the left of the foyer at the bfi, the bigger of the 2 installation spaces.

On entering there was a video screen displaying a shape similar to the one in the photo on the left.

As you entered into the main space, you could see the structures that were built into the ceiling. A combination of stainless steel, polycarbonate and controllable leds.

onward is a continuation of the united visual artists explorations into the parameters of growth and control. The structures consisted of evolving sculptures of light grown by generative code. 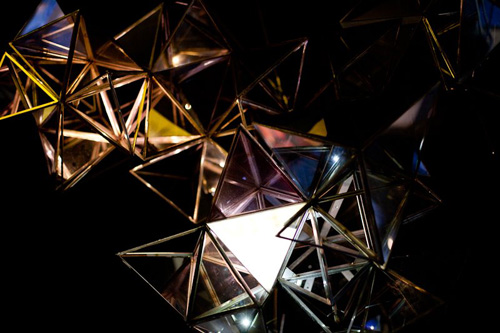 Using algorithms , tetrahedrons were generated onto the base frames of each of the lighting fixtures and then grown from the 24 possible bases that were designed onto the frame.

Attached to the frames, secondary functions were applied delivering a mixture of refractions, light filtration and transparency.

The two algorithms were then combined to achieve the final output – creating different results every time. 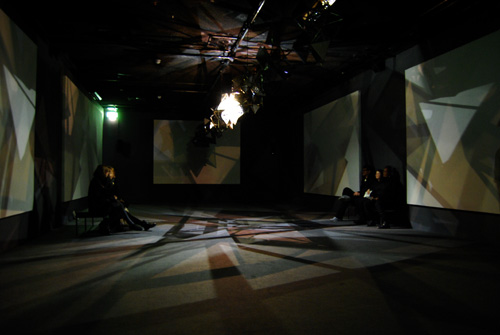 It was a very interesting idea – it was initially hard to grasp the level of detail involved in the project but after several viewings it become more obvious what was trying to be achieved. The audience, as with all these types of installations drifted in and out of the space, happy to sit and ponder the beautiful shadows and shapes being cast around the room as the lights sequenced along the roof.

UVA also contributed the intro identity clip to all this years screening programmes, a fantastic work using lasers to create the “onedotzero”.