The International Digital Art Festival Patchlab is an annual event, which combines interdisciplinary digital works created on the border of arts, new technologies and creative programming. This year, the 5th. festival edition focuses on the relation between human and machine, especially the relation existing within the new virtual reality (VR), and also on the issue of privacy and online safety.

During the festival there will be an exhibition of interactive installations and works created in virtual reality, interdisciplinary scenic project and experience audiovisual performances and live-acts. 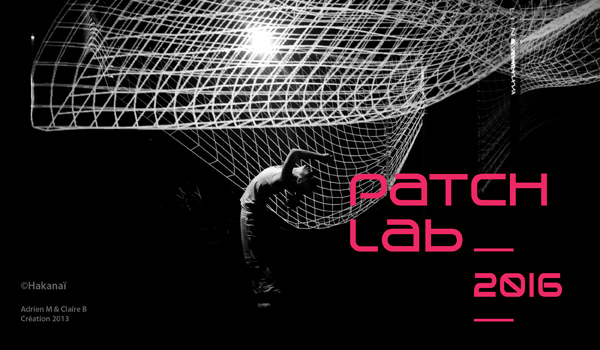 One of the main event of the festival is interdisciplinary show Hakanaï, by the Théâtre de Châtillon from France. The show demonstrates collaboration of digital technology and performing arts. It employs interactive installation art (hexagonal object) with video mapping and dance. Artists of the Théâtre de Châtillon duo, using unconscious experience of movement, create bridge between digital and material things.
Auriea Harvey and Michaël a.k.a Tale of Tales from Belgium known for their controversial and innovative projects breaking the boundaries of video games, will present their new project. Their Cathedral-in-the-Clouds is an art project using virtual reality technology against the Christian concept of the sacred symbolised by medieval cathedrals. The project consists of two main parts: digital dioramas for multiple platforms and virtual cathedral in virtual reality. It connects the spiritual notions of an intangible world, with romantic fantasies about cyberspace, rendered visible in 3D, where space and time meet on the processing units of the computer.

The festival programme includes also show of works selected and awarded during the review of the experimental audiovisual forms, Madatac.
As usual, the festival is accompanied by AV Nights. During the first one, in Manggha Museum of Japanese Art and Technology, the viewers will see, among others, the project prepared by Thomas Wagensomerrer especially for the 5th edition of Digital Art Festival Patchlab. It will be immersive audiovisual performance which critically refers to aesthetics of games and online phenomenon of Let’s Play, where the line between game and performance is blurred. The author presented his works, among others, at Ars Electronica Festival, MAK Wien, CTM Berlin, Triennale Museum Milano, Festival des Cinémas Différents Paris, Festival de vidéomusique de Montréal.

elemaun from Teheran will present its audiovisual performance De. It consists of 4 episodes of experimental electronic music based on ritual and regional music of south of Iran. This year the project was qualified to the programme of Ars Electronica festival in Linz.

AV Night 1 will be continued in one of the popular clubs in Krakow, Barka. The visual setting will be provided by 4youreye from Vieanna and Luca Cataldo from Italy.

AV Night 2 in the Hotel Forum will host Fiedel, music producer connected with Ostgut Ton label, resident of Berghain in Berlin. One of Berlin’s true peak time champs, defies stereotypical notions of what the sturdy Berlin techno sound allegedly seems like, combine apparently opposing music through interaction and mixing of styles and moods, minimalism with house, heavy electro, and even occasionally hi-NRG, without loosing the storyline – all this makes out the characteristic Fiedel sound. Eltron John is one of the most characteristic figures on the Polish dance music scene. DJ, producer, who plays deep, often harsh, but always imbued with feelings music. The music is rooted in soul, disco, psychedelia and dub but it also results in sounds of techno and house.

Sylwia, DJ and producer currently based in Berlin, started her solo project in Kraków, where she organized large-scale music events and she was an important link of local scene. Sylwia’s sets honestly engage her current interests rather than passing trends, where the audience is invited to be part of the musical journey.

Regular parts of the festival are workshops – this year we explore legal use of open source licences and online safety and privacy. An international conference is held co-organized with the Academy of Fine Arts in Cracow. It will raise issues of space design and creation of virtual reality (VR) and future of use of electronic and physical space combination for creative actions.
Patchlab festival is a member of international network AVnode (avnode.org), that unites artists and gathers information about events presenting contemporary audiovisual art, supported by the EU programme, Creative Europe.

Detailed programme of the festival is on patchlab.pl