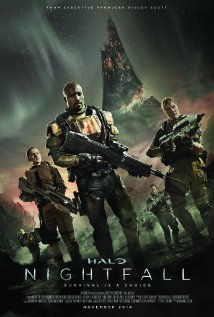 Steve Waddington chats about working on Halo Nightfall, which tells the personal story of Jameson Locke, a legendary manhunter and agent with the Office of Naval Intelligence (ONI), Earth’s most powerful and secretive military branch. The film provides the background to this pivotal new character in the Halo universe, who will play a key role in the next gaming installment.

How familiar were you with the Halo franchise before you were asked to star in Halo: Nightfall?

Not at all I have to admit, I had of course heard of it but I had never played it. I had my time playing video games back in the Lara Croft days so I was generally quite out of the mix in terms of what is popular and what people are playing, and had no idea that Halo was such a hugely popular game. We played it during rehearsals and were introduced when we started filming – it was exciting.

Did you do a lot of research to build your knowledge of the gaming world?

There was a boot camp set up for when we arrived. We were shooting in Iceland and before that Northern Ireland. The writer came from America, the head of Microsoft was there – there was a big group of people and they were really excited about the film being made. So as well as a physical boot camp there was a mental boot camp, reading the script with all of these people present, learning about the games and some of the characters that existed before us, the experience helped with the research and did it for us in a sense, so that was really helpful.

What are your thoughts on the video game world and the film world colliding?

I think it’s a great marriage!

What can you tell us about your character?

My character has had a traumatic experience that pushes him forward to do what he does, and changes his outlook on life. He doesn’t mind so much being the last one on the planet as it is a kind of redemption for him.

You have starred as some pretty tough gritty characters throughout your career. How did your character in Halo: Nightfall stand out and were you able to bring some steely Yorkshire grit into it?

My character certainly has grit, true. There is a lot of tension between my character and commander Locke played by Mike Colter. There is a mutual respect that grows throughout the film, as we need to work together to get off the planet. With these kinds of roles, the essence is usually quite similar, so the thing that stood out was the emotional edge, which is always interesting to play as it is a bit of a challenge. The emotional facet to a soldier – you don’t see that often, so that is what I would say stood out for me the most.

How much fun did you have charging about in some of the iconic sci fi clobber on set or did you all remain quite well behaved?

I’m was talking about this with the guys! It was brilliant for the first few days but then the armor starts to get heavy and gets in the way. And it did nothing but rain in Iceland – it was beautiful, but it did nothing but rain! We were literally soaked playing characters on the hottest planet in the universe, and the rain gets into your armor and there is nothing you can do. At first, looking at it all, we were like kids in a candy shop, we loved it, but it wore off pretty soon I have to say, but with the arduous journey the characters are on, it did help with the acting – maybe no acting required!

Given the size and popularity of the Halo franchise, did you feel a certain pressure or was that all part of the excitement?

It was definitely part of the excitement but you do take on an extra level of responsibility when you’re playing a character that has a huge fan base, they’ve seen him in many sort in incarnations and suddenly it’s your chance to step up and have a go. It is a little daunting I have to say, but the only way for an actor to combat that is by knowing that all you can do is make it your own. The dialogue was very good, the script was very good, so having confidence in that makes it more difficult to mess up and go wrong, so I trusted the script and gave it my own interpretation.

What was it like working with your fellow cast and crew?

They were great, we had such a crack it was brilliant. I was working with some really great people. Like I said, there were some challenging elements to the filming, Iceland is not very flat so you were constantly twisting your knee, or your ankle, with your armor running with your guns and all that, and those challenging aspects have a way of brining the actors together, because you are all going through the same things at the same time.

How do you think people will react to the film?

Halo has a large fan base and I hope the film satisfies those who already have an emotional investment in that story, I hope that we have done justice to it and that the fans will accept it and enjoy it, and I hope it appeals to people who are not as familiar with the Halo brand and that it picks up some new fans too.