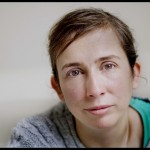 On the 12th February at the Cornerhouse cinema in Manchester, Shame co-writer Abi Morgan shared her musings with novelist Jeanette Winterson. She discussed the high and lows of screenwriting, fainting after meeting Meryl Streep, and bonding with Shame director Steve McQueen.

Abi Morgan is one of Britain’s busiest and most established writing talents. She has written across theatre, television and film. In 2002 she was nominated for a Laurence Olivier award for her play Tender, but her real breakthrough was Channel 4’s Sex Traffic in 2005, which won 6 Baftas. For TV, she has adapted Sebastian Faulk’s novel Birdsong, and created BBC’s The Hour.

Film-wise, she adapted Monica Ali’s Brick Lane for the screen, wrote the Iron Lady and co-wrote Shame with Steve McQueen. Shame was voted Front Row Review’s top film of 2012. It is a bold, provocative and beautifully captured film about sex addiction, starring Michael Fassbender and Carey Mulligan. “Why did a nice girl like you from North London go and write about a sex addict?” Winterson asks.

“I met Steve, and there was just a real harmony, we could talk about anything. One of the things we we were fascinated by was the internet and how it has changed how we evolve relationships, and the commodification of relationships, and that led to talking about sex and the people who have got addicted via the internet, to find the intimacy they can’t find in life.”

“We tried to find people in London and no one talked to us because it’s not really recognized as an addiction. In America they love to talk, they recognise it as an addiction. We met some amazing therapists, psychiatrists and addicts. The addicts were like all of us. Steve and I would come away after spending the afternoon with someone who would tell us intimate, torrid mundane details of their life. There would be this silence that would fall over us. Steve would say, “do you ever do that?” and I’d say “sometimes”. Suddenly all these nuanced behaviours that in extreme were addictions, you could see the route of them in yourself, as a man and a woman. Steve brought out the masculine in me and I brought out of the feminine in him. It was a good match.”

They worked on Shame together. “I write, but equally he does this huge transition when it goes to screen. I wrote it in a hotel room overlooking the Hudson in February that went into April. Of the first 100 pages they had of the script, they threw away the first sixty. “Steve got furious one weekend and said “oh it’s rubbish!” I cried in north London, he sulked in Amsterdam and I agreed with him and we started again.

We actually came in at page 61 and started the film there and ran those 40 pages and built on them.” Later, an audience member quizzed Morgan on those lost pages. He asked about the hinted incestuous undertones between Brandon and Sissy that exist throughout the film, that McQueen had previously deflected.

“We have a consensus about it. I know what happened. There was a key scene where you found out and, yes we did cut it. I mean, I’m a blabbermouth, so i could easily be cornered with a drink and tell you, but I won’t. I think Steve feels, and I sort of agree with him, that you can interpret it anyway you want really.”

“Steve is one of those rare directors, he is an artist, literally an artist. He made me raise my game. I liked that. It was really great to work with a director who really believed in his own voice and said ‘I know this script i know the way this film should be’. I really took a leap with him.”

“I think when you do a film about sex it is going to cause some controversy. I don’t think it really did. I think it exposes the sexual appetite not just of men but of women too, and the complexity of a man who cannot have the basic intimacy. You can meet men who are very in love with their wives but they can only have sex with a prostitute, and it’s heartbreaking for all involved.” 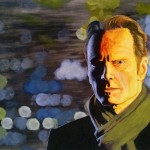 She described Michael Fassbender as masculine and charismatic. “He is also hugely tender. He’s a brilliant actor, a very special actor. He’s very exciting to be around because he’s very intelligent and intense but also a huge showman, and you get that in his performance, and that’s just a dream to write for.”

She recounted how The Iron Lady, where Meryl Streep plays Margaret Thatcher, was “really hard to write but actually the stage where Meryrl came on was brilliant, and very exciting. I went to work with her in New York in her very beautiful apartment and I had never met her before. I literally fainted in the lift because i was trying to be so cool throughout the two and a half hours i spent with her that i realised i had been breathing so shallow. There is a photo of me lying in the lift. I found her very daunting to be around. I genuinely think she is one of the greatest actresses in the world.”

Abi Morgan is excessively modest. She admitted “I think most of what i do is a process of failure – i think a lot of good work is about failing – most things you do you fail. I never look at a piece of work and think, bloody good. I i look at it and think fuck, i got it wrong”. Currently she has around seven works on the back burner, including a film about the Suffragettes and an adaptation of Shakespeare’s The Taming of the Shrew, set in 1950s Italy and starring Anne Hathaway.

Fortunately for us, she overthrew her original aspirations to become an actress and chose to write instead.