A bizarre execution of form blunts the undeniably potent content of Taghi Amirani’s documentary about the Iranian Coup of 1953. A methodical, hand-held beginning gives way to the injection of a stream of archive footage and animation that jars and upsets the rhythm of a slow but steady film uncovering information about the UK/US government’s plot to overthrow Prime Minister Mossadegh, the elected leader of Iran.

Amirani is a master of archives, the camera watches him pour over documents, related to the coup, with a strange urgency. 10 years in the making, the passion and energy of Amirani power the narrative to almost murder mystery levels of intrigue, the drip-drip-drip of information punctuated by an unexpected but welcome re-enactment of a thought to be lost interview by Ralph Fiennes is entertaining enough as the narrative explores the events of the past. 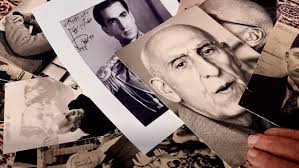 Focussing on the this missing piece of the puzzle, an interview with a MI6 operative who orchestrated the coup, is Amirani’s Holy Grail, he drives at an answer, poking and prodding filmmakers who had previously been in contact with him, undeterred by the discomfort he is causing.

This is when there is an abrupt switch in style, to the aforementioned flow of archive footage and animation. All the goodwill built through the thoroughly determined and charming first half is lost in a beginning to end recount of the history of the coup and its aftermath. A straight retelling of the facts. Gone is our little murder mystery and our intrepid detective.

Brave and steadfast thought Amirani is, the film in the end falls flat. There are revelations but they are starved of resolution by the awkward structure of the film. The love for Mossadegh and the sorrow of his removal is almost tangible in the first half, once this is absent, the heart of the film is lost, leaving it playing out its last beats before timidly expiring.

Coup 53 is screening at London Film Festival on 6th October