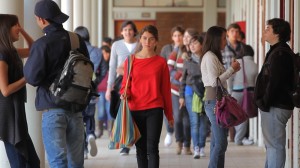 Mexican writer-director Michel Franco’s Después de Lucía (After Lucía) is a dour drama about the disastrous effects of bullying, and it is a powerfully affecting and agonizing ordeal. This confident work was the Mexican submission to the Oscars, it won the Un Certain Regard at Cannes, and the Silver Hugo at the Chicago International Film Festival. Franco’s debut feature, Daniel & Ana, which premiered in the Directors Fortnight at Cannes in 2009 and shown at the ¡Viva! festival in 2010.

Coping with the loss of Lucía in a recent car accident, her beautiful teenage daughter Alejandra (Tessa ia) and her husband Roberto (Hernan Mendoza) decide to move to Mexico City from Puerto Vallarta to make a fresh start. Roberto becomes the head chef at a new restaurant and Lucía finds a new group of friends at school. Although struggling through their grief, they are affectionate and supportive towards one another, and are simply getting on with things with a stiff upper lip. In one moving scene,  Roberto is unpacking pans in the new kitchen, he pauses suddenly and begins sobbing, before resuming the task. The same happens to Alejandra when on a weekend break with her new classmates, she keeps from them that her mother has died, and takes a break from the party to cry in the toilet.

What begins as a promising social life for this intelligent and amiable young woman takes a bad turn when she has a drunken sex encounter with José, the object of desire of another female in the group, and he films it on his phone. The following day it is all over the internet. He denies any role in this, and we never find out if he is telling the truth. The other girls are envious, and treat her disgracefully. This physical and verbal abuse spreads like a virus, and suddenly Alejandra is a victim with a whole pack against her.

After Lucía reminds you how cruel teenagers can be, and how reliant the high school dynamic is on the pressure to conform. Inhumane treatment of another person for no good reason can be infectious. In this film, the domino effect of bullying is completely unforgiving and taken to extremes. The torture goes beyond any harsh words, and extends to violent and sexual abuse.  In one unbearable scene, it is Alejandra’s birthday, and her classmates stand around her with a cake they have made. The cake is filled with some unidentifiable bodily substances and they force it into her face until she vomits. The strident realism of Franco’s style mean there is no relief, no non-diagetic sound or diversion from the unflinching brutality of the situation.

It’s incredibly difficult to endure, far more so than most horror and thriller films, but it’s so well done it’s also completely absorbing. Tessa ia and Hernan Mendoza give wonderfully nuanced, naturalistic performances.  Tessa ia is is controlled and understated as Alejandra, as she accepts what is bombarded at her without much resistance or reaction, internalizing her pain and humiliation behind a hard exterior. The film’s climax offers no solace from the devastating turn of events. After Lucía will leave a long lasting impression; the leads and the director are ones to watch out for in the future.