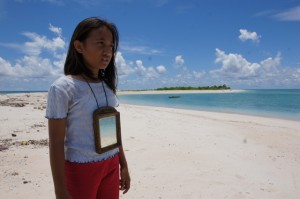 Sometimes it takes a while for a festival to produce something that really blows you away. I started watching films on Monday and it wasn’t until Friday night that, in spite of many excellent films being shown, Edinburgh Film Fest produced a film that might one day end up being called a masterpiece (although that’s a strange, subjective term at the best of times). The Mirror Never Lies is certainly a film that is both moving and beautiful, that oozes raw emotion and features some truly gorgeous cinematography. Basically it’s really, really good, and often there isn’t a lot more you can say about a film than that. But here goes anyway…

Pakis lives with her mother in a fishing village in Bajo, Indonesia, where all the houses are on stilts over water and children have to canoe to get to school. Every day she waits for the return of her father who went missing on a fishing trip, looking expectantly into the mirror he gave her, hoping that she will see him in it’s reflection. Meanwhile a marine biologist visits the town looking for dolphins to study, who befriends Pakis and also her mother. Pakis’ best friend Lumo just wants to make a good impression with songs and hair gel. It’s a sweet, moving story of family and loss, featuring star turns from the two lead children.

Framed against the seas of Indonesia, the film is bathed in a glorious azure that shimmers and ripples hypnotically, a giant, living mirror that reflects the heart of Pakis far more than the wooden trinket she carries round her neck. Where her mother hides behind a mask of white make up, Pakis’ escape is the sea. It’s there where she finds her father, not in the frame where she only sees herself. It’s a film that encourages reflexivity, that causes one to look inwards yet without being heavy handed: the tree of mirrors at the end of the film may well be the most subtly beautiful image you’ll see in cinema this year.

The whole film is visually stunning, in fact, with an understanding of the aesthetic appeal of nature that brings to mind Terrence Malick. But where the beauty in Malick’s later films is polished and exquisitely shot, here the cinematography is far more raw and low-fi: the resulting frames are perhaps more real because of it. Bringing sand, sea and wood to life, as well as revelling in coral reefs and sumptuous weddings, this is a glorious, gorgeous work of art. Yet the beating heart of the story means that is is no mere exercise in empty beauty. It’s an incredible piece of cinema.