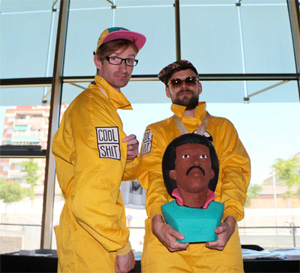 Launched at OFFF Festival 2013 was the Lionel Ritchie’s Head project from the guys at Hungry Castle. A Barcelona based collaborative effort of Dave Glass and Kill Cooper who specialise in creating large-scale works inspired by pop culture.

The scale model lovingly sculpted by Alex Sans Masso has to be seen to be believed, and it’s only going to get bigger and weirder.

They are calling on the Kickstarter community to get behind this project so a large scale version can be constructed at Bestival 2013. Inside the behemoth like giant head will be a telephone so people can hear Lionel sing those sweet sweet words we all long to hear, ‘Hello… Is it me your looking for?’. One lucky couple will also be able to actually sleep inside Lionel’s head. Talk about a room with a-fro!!

Talking to the Hungry Castle team it’s clear to see how extreme and downright funny their ideas can get.

Producing a clothing line called Cool Shit, the T-shirts feature split images of stuff that’s cool and as you guessed it, stuff that is shit. Which is which is up to you, as the guys said to us ‘whether something is cool or shit, you can’t ignore it’.

So get behind these guys and support their cause, this project must make it to Bestival. You can by Lionel related merchandise or just donate at
http://www.kickstarter.com/projects/daveglass/lionel-richies-head-bestival-2013 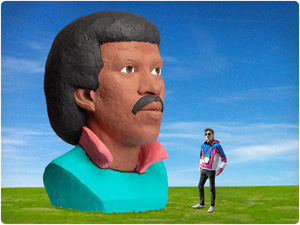 “A good looking Lionel Richie Head at a respectable height (3m) will cost us £4,900. This includes the internal turbines to keep his head up, internal sandbags to keep his head down and £1,000 for overnight Bestival security (aka Head Guards). The cost of creating and shipping the rewards for our backers is also included here.

We hope with the possible success of raising the money to make a 3m inflatable sculpture, that we also reach our additionally intended ‘Stretch Goal’ of £10k. This money will be used to make Lionel Richie’s Head bigger (6m). Making it bigger allows us to create a portal that will let Bestivalers go inside Lionel Richie’s Head.”

If ever there was a project that needs to be made, it’s this!