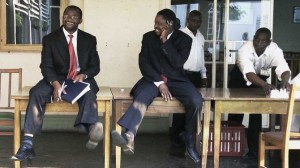 Shot over three years, Democrats tells the story of the drafting of Zimbabwe’s 2013 democratic constitution, and is far more interesting than something fitting that description has any right to be. After more than twenty five years of rule, Robert Mugabe’s party ZANU-PF, through a combination of continued local protest and international intervention, is forced to share power with contesting party MDC-T; under the condition that a document will be produced detailing the laws of rule for a country supposedly entering a period of newly democratic governance. Following chief legislators from both parties (Paul Mwangana, ZANU-PF and Douglas Mwonzora, MDC-T) Danish director Nielsson offers a regularly fascinating insight into the process of political legislation, achieved through strength of both portraiture and access.

Opening with a stylised barrage of newsreel montage interspersed with succinct introductory pockets of text, Nielsson quickly establishes the basic context of the situation as she joins it in a fashion emblematic of the doc that follows. Visually unassuming, the film is aesthetically functional to its credit, smartly framed wide angle cinematography from Henrik Bohn Ipsen is edited intelligently by Jeppe Bodskov meaning the film flows coherently and seamlessly despite a presumed excessive amount of material from the three year shoot.

Whilst sitting in on the meetings between the two parties, and following them around the country for public meetings (wherein citizens can, in theory, pose their suggestions for the constitution they’ll receive), Nielsson eschews voice over narration in favour of periodic clippings from news broadcasts, a single, unnamed radio voice contextualising the progression through the three year period of negotiation and bringing a sense of narrative progression and chronology. “Are the people ready to speak freely in a country where it is usually prohibited to publicly criticise the government and its president?” the voice announces early on, voicing Nielsson’s primary concern about the process without the need for any explicit presence from the filmmaker. As an outside observer, Nielsson is wise to let Zimbabweans speak for themselves

Nielsson has an remarkable level of access, her camera privy to many intimate moments in the camps of both parties, as well as seemingly any drafting meeting they share. Without moving away from the necessarily limited area of the role of this particular litigation in Zimbabwe’s wider striving for greater freedoms, Democrats reveals quite a lot about both the national situation and the broader international world of political diplomacy. We see how terrible the democratic situation is – observing public meetings where all participants are clearly reciting a rehearsed public line in fear of the cost any deviation, as well as outbreaks of violence that represent a wider understanding of the vastness of the scale of intimidation experienced by Zimbabweans under Mugabe – but also are provided with a sense of hope, the promise of even minor liberation and the value that the process the two men are working towards could have, should they be able to reach agreement.

Though the film’s focus is on the process of diplomacy, it is the personalities of the two men at the centre that carry the film. Nielsson is wise to keep an ambiguity about the proceedings and the relationship between the two figureheads, which swings constantly between hostility and a kind of distanced admiration. Mugabe’s ZANU-PF representative Mwangana seems initially to be a wide-smiling, navy-suited bastion of systemic corruption, a man who presents a surface civility that is betrayed by a disturbingly corrupt cackling laugh – but reveals his human side later. “I’m in the system and I know how lethal it is,” he confesses to camera late on, as Nielsson’s portrayal becomes increasing empathetic towards a man who is evidently a tool of a larger corrupt system. When we see him holding his head in his hands after his own party abruptly turns on him, its pointedly clear how fragile the instruments of power are and how quickly things can turn.

By contrast MDC-T representative Mwonzora comes off as a patient, humble and openly virtuous proponent of democratic change, perhaps unrealistically so. Midway through the process, Mwonzora faces an almost complete breakdown of support for the initiative after a Zimbabwean attempting to voice his demands for the constitution is beaten to death. Fear turns rapidly to anger as the man’s family harangue the MDC-T representatives over their inability to secure them any more freedom of expression than Mugabe is offering. Mwonzora’s arrival convinces the people that progress is still possible and touchingly, the mood shifts just as quickly again. As the bitterness resides into hope, the community breaks out into pro-democracy song – “tell the ruler, to let his children go. Mwonzora is with us, Mwonzora set us free.”

As the two men engage in a back and forth, their committee deliberating over both legal minutiae and important national foundations (an important clause surrounds whether a president may stay in office for more than 8 years, as its inclusion would immediately make Mugabe’s presidency illegitimate,) completion of the constitution seems impossible. As well as the timely (and obviously false) charge against Mwonzora, a meddling national press threatens to impede proceedings constantly, endangering Mwangana’s life at one point, lest it be thought anyone was safe amidst this nation in extended chaos. What Democrats does well, as a doc about activity on a government level, is to make clear is that its not just violent, unlawful corruption that is ruining this nation, but the day to day corrupting influence that operates well within the confines of the law. At many points, ZANU-PF is winning the propaganda war not because it is bending the law or exerting its influence forcefully, but simply because it is better organised or has more resources.

Democrats is more of a look behind-the-scenes than an expose, focusing on a specific area of Zimbabwean democracy. By the end, little that couldn’t be gathered from cursory knowledge comes out but the access is fascinating, as are the two men in the middle. The tightness of formal construction brings intrigue and tension to what, on the face of it, could be fairly dry material, the frustrated litigating of a national constitution. Looming over the documentary is an understanding that what Paul Mwangana introduces as “the second most important book after the Bible” is ultimately a sham. There is a background acceptance in all the action Nielsson is made privy to that behind their words about change, progress and improvement, it is mostly talk. The resultant constitution may just prove a piece of paper stating empty declarations, and though this doesn’t serve to undermine Democrats exploration of the crafting of it, it doesn’t make for much of an uplifting conclusion.