Horror Channel, FrightFest, Movie Mogul and Wildseed Studios have announced the winner of their nationwide search for a talented 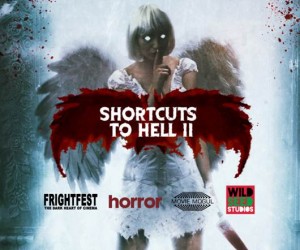 filmmaker, primed and ready to make their first horror feature film. Chosen by a public vote from a professional jury-selected shortlist of three finalists, the winner is Joe and Lloyd Staszkiewicz who won for their short film Hubert’s Ghost.

Joe and Lloyd Staszkiewicz, will have their film produced by Movie Mogul and Wildseed Studios, entering production early 2015, with a minimum cash production fund of £20,000, offered by Horror Channel and Wildseed Studios equally. It is hoped to expand the budget with other funds and sponsorship that the partners and team can bring to the table. The completed feature film will receive UK digital distribution, its world premiere at Film4 FrightFest 2015, and a broadcast premiere on Horror Channel, the UK’s first channel dedicated to the dark side of cinema. 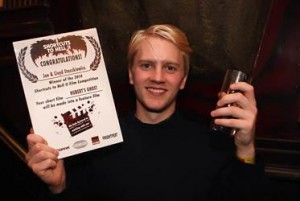 Lloyd Staszkiewicz (pictured left) said: “It’s amazing to have won this competition. It’s been a tough experience, going through the public vote, but Joe and I have learnt a lot during the process. We’re certainly more ready now to make the movie than we were before.”

Chris Sharp, Chief Content Officer for AMC Networks International – Zone commented: “Shortcuts To Hell isn’t just a film competition, it’s a national talent search designed to unearth fresh new, highly driven talent and provide a solid platform and framework for them, within which to produce their first feature film. We hope that this year’s winners will champion this visionary new production model, and that their success will help pave the way for many more exciting new filmmakers to follow in their wake, with bold and original new feature film projects each year. Congratulations to Joe and Lloyd Staszkiewicz, we look forward to showing their film debut on Horror Channel.”

John Shackleton, Joint Managing Director of Movie Mogul added: “It is truly exciting to be able to offer this remarkable opportunity to such talented newcomers who have proven their ability and worth on every level throughout this competition. We can’t wait to work with them and look forward to presenting their films to you in 2015!”

Miles Bullough, Managing Director of Wildseed Studios said: “Wildseed is all about supporting new talent to create projects that punch above their weight and we can’t wait to get stuck into producing what we like to call our next ‘microbuster’ movie with our partners the Horror Channel and Movie Mogul.”

Alan Jones, Co-director of FrightFest also added: “The Shortcuts to Hell competition slot at FrightFest was an instant success the moment it was announced. And it is always a hot ticket because it attracts such an interested and engaged crowd. It is so exciting for us to be a part of building its reputation every year as the major go-to search for tomorrow’s industry talent. FrightFest congratulates the winner and knows it will be showing the work of this innovative competition winner in the very near future.”

Check out http://horrorchannel.co.uk/shortcuts_to_hell.php for more details.