Features
If you were asked which straight films had so much gay undertone they should’ve been a LGBTQ movie, this is probably the list you would come up with.  Join in with your favourites in the comments!
A League of Their Own

In 1992, real-life friends Rosie O’Donnell (not yet out at the time) and pop diva Madonna showed fun screen chemistry as well in this fact-based comedy about the Rockford Peaches, an all-female baseball team in the 1940s. All the women (played by the likes of Geena Davis, Tank Girl’s Lori Petty and Tea Leoni) seemed to sport beaus in the movie, but Davis’ character, Dottie Hinson, was inspired by Josephine D’Angelo, an early lesbian hero who actually played for the South Bend Blue Sox. D’Angelo was fired from the team after she showed up to play ball sporting what she herself called a “butchy” haircut! While none of that backstory or outrage made it into League, a sense of uber-feminism prevails.
All About Eve 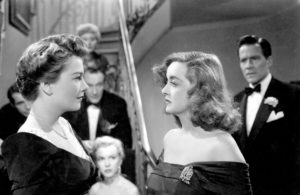 “Fasten your seatbelts, it’s going to be a bumpy night!” Frequently described as the bitchiest film ever made, this insightful peek into the mid-century theatrical world offered gay icon Bette Davis her most indelible role as that endlessly quotable Broadway diva, Margo Channing. Shocker: The script was penned by a straight man, writer-director Joe Mankiewicz. Even more surprising (or not), a recent biography of Mankiewicz revealed that Margo’s rival, conniving upstart Eve Harrington (memorably played by Anne Baxter), was originally conceived as lesbian. Even without this hindsight, it’s not a challenge to read certain characters here as LGBT. Take George Sanders’ acid-tongued columnist Addison DeWitt, perhaps the cattiest character ever committed to celluloid, a man prone to withering bon mots and squiring a pretty young beard on his arm (affording Marilyn Monroe an early role). And of course, there’s the title character, relentlessly obsessed with Margo well past the point of comfort (no wonder calling someone “Eve” has become a shortcut to describe a ruthless backstabber). The only time Eve shows genuine warmth toward another character is when a comely young female stalker breaks into her apartment and seems to make a pass at her.
A Nightmare on Elm Street 2: Freddy’s Revenge 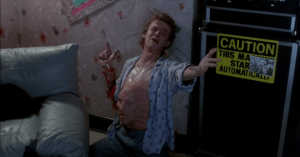 Likely the queerest mainstream horror film ever made, this sequel to Robert Englund’s surprisingly inventive spin on the slasher genre featured a protagonist Jesse (out actor Mark Patton) who screams repressed gay. For example, he wakes up from a nightmare and wanders inexplicably into a queer leather bar and bumps into his gym teacher. In an interview, Englund shared that this second Nightmare was “intended as a bisexual themed film. It was early ’80s, pre-AIDS paranoia. Jesse’s wrestling with whether to come out or not and his own sexual desires (were) manifested by Freddy. His friend is the object of his affection. That’s all there in that film.” It certainly is.
Fried Green Tomatoes

Kathy Bates, Jessica Tandy, Mary Stuart Masterson, Mary-Louise Parker and Cicely Tyson star in this sisterhood of the senses, based on the Fannie Flagg novel about a group of close friends who mingle at small-town Georgia’s Whistle Stop Café. Make that very close friends in the case of tomboy Imogene “Idgie” Threadgoode (Masterson) and older, wiser Ruth Jamison (Parker). After Idgie saves Ruth from an abusive husband, the two women raise a child together — and get riled whenever a man is near the other one. True, the two never profess their lust for each other, leaving some fans to marvel at their profound friendship, and others to imagine what might have been.
Lawrence of Arabia 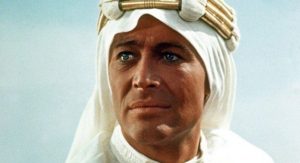 Thomas Edward Lawrence is perhaps one of the 20th century’s greatest sexual enigmas. Although confirmation of his sexuality looms to this day, the pre-World War I intellectual has widely been thought by researchers to either be homosexual or asexual. In this epitome of sweeping epics — 1963’s Oscar winner for best picture — Peter O’Toole emotes dramatically as the British archaeologist, military officer, diplomat and writer (phew!) seeks to find peace by creating a new type of warfare during the Arab Revolt against the Ottoman Empire. Highly regarded as director David Lean’s biggest masterpiece, Lawrence is fascinatingly layered viewing for that backstory alone. And it’s a campy treat to see the (eye-liner-heavy) Brit flounce around as he tries on his ankle-length, silky and very flowy Arabian thwab for the first time.
Rebecca

The only film helmed by Alfred Hitchcock to win the Academy Award for best picture is also one of the master director’s queerest. Based on Daphne Du Maurier’s best-selling novel, the story chronicles a nameless and naïve young woman (Joan Fontaine) who marries the mysterious Maxim de Winter (swoon-worthy Laurence Olivier) — and soon finds herself competing with the specter of his glamorous dead wife. The most potent character, Mrs. Danvers (magnificently portrayed by Judith Anderson), is clearly a coded lesbian. She’s a servant slavishly devoted to — okay, obsessed with — the unseen title character to the point of longingly caressing the deceased’s lingerie. Danvers, doing her own version of “Nothing Compares 2U,” is also intent on preserving the first Mrs. De Winter’s memory by driving the second Mrs. De Winter, well, bonkers. Rarely has such morbid Sapphic longing been displayed on film.
Rebel Without a Cause

Made at a time when being non-hetero was a crime, Rebel is perhaps the most “bisexual film” ever released by a major studio. Nicholas Ray (who some movie historians claim was bi) directed James Dean (ditto) in his most famous performance as Jim Stark, a tortured teen whose torrent of emotion resonated with young audiences as never before. Sal Mineo (who was actually known to be bisexual) costarred as Jim’s pal Plato, who kept a photo of handsome movie actor Alan Ladd in his locker — and who very obviously crushed out on Dean’s character. And, while Jim had a girlfriend (Natalie Wood), he definitely had a soft spot for Plato too. A landmark coming-of-age film for all, Rebel becomes even more poignant when viewers realize that all three leads died prematurely.
Strangers on a Train 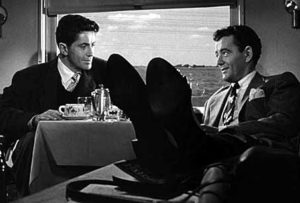 Three years after starring in Alfred Hitchcock’s queerest film, 1947’s Rope, handsome bisexual actor Farley Granger added yet another super-queer film on his and the master’s C.V.s, a thriller adapted from a novel by lesbian author Patricia Highsmith (The Talented Mr. Ripley and The Price of Salt, which queer auteur Todd Hayne’s turned into the acclaimed Carol in 2015). Granger, who came out late in life, stars as a tennis champ who — after getting drunk, trading intimate secrets and establishing some uber-masculine camaraderie with Bruno (tragic actor Robert Walker) — is persuaded to swap murders with the charismatic stranger. That Bruno recognized him from the newspaper’s gossip pages is merely clue number one to the film’s pervasive gayness.
Thelma & Louise 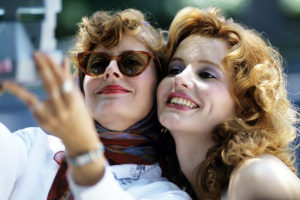 Director Ridley Scott hit the nail on the head with this female empowerment film about the titular friends (Geena Davis, Susan Sarandon) on the run from Thelma’s abusive husband, a journey that iconically ends with them agreeing to (spoiler alert!) fly their car off a cliff. Sure, the 1991 classic depicts both women in jeans and a penchant for danger, but that doesn’t make it a gay feature – or does it? No, it goes much deeper than clothing. GALECA’s barometer is set the moment these two ladies decide to risk all to live – or die – protecting one another. If that isn’t love, what is?
Top Gun 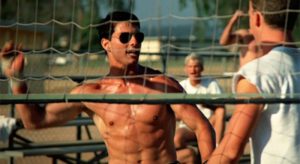 Ah, Top Gun. What makes slick director Tony Scott’s wild-flying Navy pilots drama so almost iconically queer? That double entendre-loaded title, of course. The characters’ testosterone-raging banter (“I want somebody’s butt, I want it now!”). And, um, the inexplicable rivalry between studly hotshot Iceman (Val Kilmer) and studly hotshot Pete “Maverick” Mitchell (Cruise), two pilots who show off for each other in the skies and on the beach (via a volleyball match that has them sweating and staring into each others eyes). Those UFC tussles pales in comparison here! And when Maverick takes a wingman, it’s sure not his love interest, Charlotte Blackwood (Kelly McGillis), who went by “Charlie” and wore a baseball cap! This sexy 1986 smash soared to in $356.8 million in U.S. ticket sales — and inspired Saturday Night Live and Quentin Tarantino to spoof its (the writer has said) unintended homoeroticism.
Thanks to GALECA, the Society of LGBTQ Entertainment Critics (previously known as the Gay and Lesbian Entertainment Critics Association), who shared its choices for The Ten Best Films You Never Knew Were LGBTQ with us.