The Man with the Scythe | Front Row Reviews
Home
Features

The Man with the Scythe

Death may be a difficult subject for some people but cinema has never shied away from exploring it. The nuances of the topic are often hidden from the mainstream but some films tackle them head-on alienating a society that is uncomfortable with even thinking about it. In this era of materialism and high expectations of life, there is a sense of entitlement in the air and the grand finale is far from the minds of most. It has become far too easy to hide death, the availability of care homes where the old can be sent to die means families, especially the children, are growing ever more dispassionate about the process. Two films from late last year depict the polar opposites of families dealing with a long death which highlighted the chasm of humanity between a care home and a death at home.

Stopped on Track, the latest from German director Andreas Dresen, is the story of Frank Lange (Milan Peschel) and his terminal cancer diagnosis. He and his wife decide that he will remain at home, electing to bring in outside healthcare when needed. The decision means that Frank and his family must suffer through the extreme lows the condition presents but they are all sharing the journey. His initially hesitant daughter embraces her father in his last moments; his death will make her a stronger person, one more respectful of family and the short time they are gifted with each other. 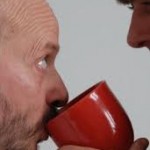 The film is a perfect example of the idea of a good death,something that is sadly rare nowadays; the director describes it as “a kind of fairy tale”. Although the film is a difficult watch at times there is something to be said for the dignity and love that is found in Frank’s death in his home. Dresen notes that less than 100 years ago it was quite common for the family to be housing children and the elderly. Being able to see and touch their dying grandparents at home let the children become used to it, not to be scared but to embrace the passing of a family member.

My family has experience with this as recent as the 1970’s. My mother’s aunt took in her own mother as she became infirm and was unable to live on her own. Faced with the prospect of a care home or taking her in, the only choice that was considered was the latter.

“But now society takes care of all this and our fear grows because we are not used to that anymore” Dresen says. Although the film is really tackling the personal story of Frank Lange there is a societal message implicit within that is more powerful when considering the film in retrospect. We have allowed some base instinctual processes to be passed on to our government and our healthcare system without the slightest consideration as to how this will impact on the human psyche in the long run.

A seemingly benign but actually quite disturbing example of this desensitised view of death comes from a personal experience. Having lost my brother when I was 4 years old, my only real memories of the time are visiting graveyards shortly after his death. A year or two later when asked to draw a picture of a family event in school I chose to illustrate my family visiting my brother’s grave. Instead of asking me what my picture was about my teacher decided to contact my parents and inform them that I may need psychiatric help, a completely ridiculous assumption. So uncomfortable was she with the idea that I would deal with the death in this way she assumed that there must be something wrong with me.

Dresen describes his film as presenting the best situation possible for the family, it gives them a fighting chance for their dignity. The calmness of the surrounding friends and extended family gives it all a sense of normality, though this is in a sense unorthodox, their composure illustrates how peaceful the overall situation is. Unlike the opinion of the aforementioned teacher, death seems at its most manageable when confronted face-to-face, scythe and all.

Moving on to the Wrinkles, a Spanish animation telling the story of Emilio (Tacho González), a retired banker who is placed in a care home as he begins to suffer from Alzheimer’s disease and can no longer live by himself. Initially rather affronted by the residents and staff in the home Emilio begins to grow more comfortable in his new surroundings but is still guarded. It proves that this is due to his Alzheimer’s of which he is of course oblivious, his friend Miguel (Álvaro Guevara) attempts to make his stayeasier, the film is a beautiful story proving that Alzheimer’s does not mean the end of a life, so long as there are people who care to help you. 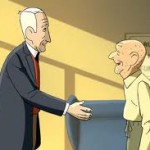 Although the tale does not delve deeply into the sorrow involved in Emilio’s removal from his home and distancing from hisfamily, it was in fact this point that stood out the most during my viewing. Although I enjoyed what is certainly a well crafted and thoroughly thought provoking film, it left a question burning in my mind. Is this really the best we can do for our elderly and infirm? It was all too easy for the family to drop Emilio at the door of this facility with his suitcase, sign him in and depart without so much as a backward glance.

Another example of the callous nature of society when confronted with the inevitability of death is found in The Savages (2007). Jon (Philip Seymour Hoffman) and Wendy Savage (Laura Linney) face the reality of familial responsibility when their estranged father (Philip Bosco) needs their care after beginning to suffer from dementia. Their father must move out the house he shared with his late partner and his offspring, doing the done thing, begin to look for a care home. So speedily do they dismiss the idea he stays with one of them that the issue is glossed over, it is not even an option, a very stark departure from the family in Stopped on Track.

When thinking about these films in unison it is hard not to wonder why the family has changed in this way. It is an inhuman way to treat the ones who need us most. When did death become something we could outsource? In The Savages the siblings spend time finding the best home they can afford, like shopping for clothes they must find the best fit for them, something that is in their price range but is still comfortable. The NHS hospice system makes it very easy for families to manage the death of their loved ones into 1 hour visits. Instead of out of sight, out of mind, it strikes me that if there were a far reduced hospice system carers would be able to visit the dying in their homes to assist families who would struggle to be there 24 hours a day.

The current method of care appears devised by a society unwilling to deal with death but cinema does not run from the Man with the Scythe.  The Fountain (2006), a poignant story of a man coming to terms with the death of his terminally ill wife is often forgotten but is extremely relevant to this issue. Either viewers do not like to think about the issue the film raises or do not relate it to real death, possibly because they have become so far removed. The film travels through time and space but the core issue of dealing with the death of a loved one, acceptance, is dealt with in a very real manner. Never Let Me Go (2011) handles death in a microcosm, the story of people bred for organ donation, the brevity of their life is not troubling for them. However audiences and even the other people in the film look upon the donors with reluctance and slight disgust, resembling the way much of society views death.

An oblique gaze at Transformers: Revenge of the Fallen (2009) compared with Transformers (1986) will reveal much. In both films the hero, Optimus Prime, is killed but in the former he is revived, why did the studio feel that in 2009 the audience could not accept what the audience in 1986 could? Just 23 years had passed but even cinema runs from death now it feels the audience may not like it.

Human beings fear death, even the word can cause a shiver, but choosing to ignore it will not solve the problem, it will only hinder it.Between Stopped on Track and Wrinkles there is much to be learnt about how to treat our dying family members the way they deserve, we can fear death but still respect the dying. Hiding should not be an option, thankfully cinema can always inject a strong dose of real into our lives. It reminds us of the hooded figure lingering in the corner and that he isn’t going anywhere, accepting he is there is a step towards controlling our fear.