Last week we reported that one of the leading arts and technology collectives, seeper.com have been commissioned by the Northern Ireland Tourist Board to produce the opening show extravaganza for Titanic Belfast, Europe’s largest tourist attraction opening in April 2012.

The launch party will involve a 45 minute live show consisting of audio, projection mapping onto the new building, fireworks and pyrotechnics all in perfect synchronisation. The show will be taking place this Saturday, 7th April. 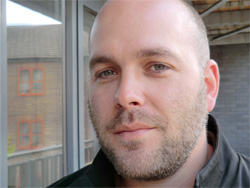 Front Row Reviews caught up with the Creative Director of seeper, Evan Grant to discuss the show and background behind it.

[FRR] What was the first major mapping project for seeper and how long ago was that?

[EG] The first mapping project that we did was The Battle of Branchage back in 2008. Later followed up with a Kinect Launch event shortly after.

[FRR] The Titanic show is a huge event, how did that come about and how long has it taken to put it all together?

[EG] Initial conversations about the projected were probably started about a year ago but the actual creative production has been going on for about 3 or 4 months.

[FRR] And how many people have been involved in the production process?

[EG] Well, the overall team working full time has probably been 5 or 6 people, something like that.

[FRR] Is that the average amount of people that would work on other projects for seeper? This one is bigger than most isn’t it?

[EG] It depends on the project really. This one is longer in duration, this is a 45 minute show, most projection mapping shows are probably 10 – 15 minutes at most, so yeah this is quite a long one.

[FRR] Is it frustrating that all the months of work to create a project like this, and then the final show will only go live once?

[EG] Yeah it can be, some of them only go live once, others play out a few times. It’s a little bit frustrating but it lives on online. 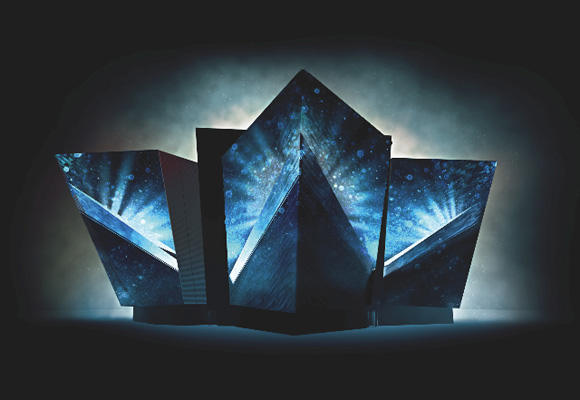 [FRR] I assume you are all prepared for Saturday?

[EG] Well, i’m actually on site now and setting up all of this week. I’m sure there are going to be a few sleepness nights until we get there!

[FRR] So, technically, how many projectors will be used for the show?

[FRR] Did you get much creative freedom with the content?

[EG] We had total creative freedom on it.

[FRR] Is that always the case with these type of bigger projects?

[EG] Yeah, yeah pretty much, people commission us really, we’re not really an advertising agency. We tend to be able to tell the client what they want, which seems to work well. I think people have respect for the previous work that they’ve seen and are happy to leave it to us.

[FRR] What type of software do you use to create the show with?

[EG] We have our own software that we built. For this show we will be using a new version of our seeserver. We developed it all in house, from the ground up basically. It does real time graphics, rendered graphics, audio, osc, dmx, all that kind of stuff.

[FRR] So how did you get involved in all of this? What’s your background leading up to it?

[EG] Well, i started seeper in my first year of uni. I’ve just done this since uni really. I was studying new media and interactive media that kind of stuff and just became frustrated with what was being taught. I didn’t think it was going in the right direction, so decided to start doing things myself and learning shit as i went along.

[FRR] Regarding the Titanic project, what do you think this show has new to offer the medium of projection mapping?

[EG] It’s a really challenging building. I don’t think anyone has tackled a building that’s as complex as this. There’s a real time part to it as well with real time graphics. We’ve also got integrated pyrotechnics and different special effects too. We’ve touched on these techniques in the past but this is certainly one of the most complicated ones that has been done.

[FRR] Where can you see it going in the future? How are you going to top this show?

[EG] For me, it’s all about real time graphics. That’s what interests me the most. We have some more projects coming up later in the year. I’m very interested in integrating it with Theatre and Dance.

[FRR] Why do you think the big animation companies like Pixar have not got involved with projection mapping?

[EG] Some of them have. Some of the post-production companies are trying to get into it. Some of them quite aggresively as they have the motion graphics skill in house.

[FRR] Where did you get the inspiration for the content for this show? There is no shortage of sources about the history of Titanic.

[EG] The narrative for this is the history of the Titanic. There’s plenty of visual inspiration there. In a fairly abstract way we tell the story from it’s construction, through to it’s maiden voyage to the sinking to this event and the re-birth of Titanic and the re-birth of Belfast moving into a connective future with new media, information technology and these kind of things.

[EG] Yeah, yeah it’s a very cool building. Probably the worst type of building you could try and projection map.

[FRR] What sort of problems have you encountered?

[EG] The whole thing is anodised to reflect light. So, yeah, that is a bit of a problem. In total there are 3,000 pieces and 2,000 of them are unique. So we have to effectively create 3 different shows for the different sides. Every side is completely different.

[FRR] So the launch party is Saturday, what else is going on?

[EG] The main show will be broadcast For the next few days there are some interactive pieces and on the final day there is an MTV Concert, which we are doing the backdrop for as well.

[FRR] And finally Evan, what sort of crowd numbers are you expecting on Saturday?

Front Row Reviews will be on site in Belfast over the weekend to see it all first hand. Check back next week for a full report.

The show will be streamed on the net – you can watch it here on Saturday 7th April, 9pm. 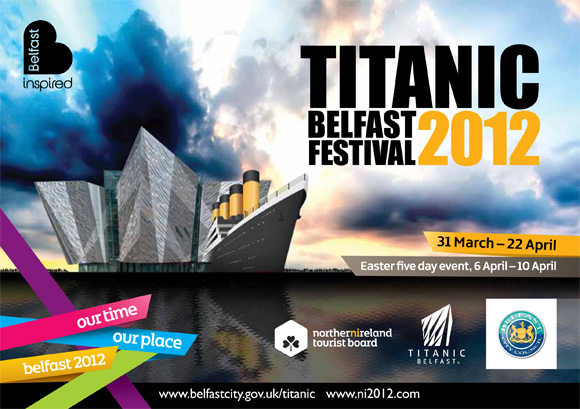