This years Film4 Summer Screen at Somerset House is accompanied once again by some BEHIND THE SCREEN events in association with BAFTA. Running from 27 July – 7 August 2011 film fans will have the opportunity to see some of their favourite films in one of London’s most iconic venues. The open air courtyard – The Edmond J. Safra Fountain Court at Somerset House.

Over twelve event days the series features everything from UK premieres to cult action thrillers, romantic comedies to film classics – all showing on a state-of-the-art screen with full surround sound.

BAFTA: BEHIND THE SCREEN EVENTS

As a prelude to the film screenings, you also have the opportunity to attend some exclusive events from Bafta. This is your chance to hear filmmakers and industry insiders explore themes and subjects linked to the film programme from some of the biggest names in the business. Front Row Reviews have attended several of these events before at other venues and they were great. I’m sure these will not disappoint either. These particular events tie in perfectly with the films thats will be shown that same evening. However, please note tickets are purchased separately for the film screenings.

The talks last approximately one hour and guests are invited to enjoy a complimentary drink before hand in the Behind the Screen bar. After the talk anyone who has purchased a ticket to the main film screening will also be given access to an exclusive area in the courtyard, ensuring a great view of the screen. Availability is limited so book early! Tickets are priced at £10. See below for booking details.

view the full line-up in detail 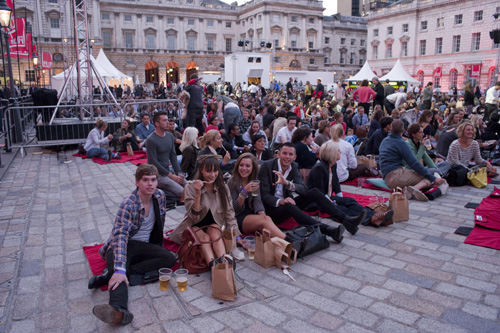 What better way to enjoy your some classic films throughout the summer than to sit outdoors in the magnificent courtyard of Somerset House? A truly unique location. Doors open at 18.30 and in the past many people arrive early with picnic in hand and settle down to listen to DJs from 19.30 before the sun sets and the projection starts to roll. Films screenings start at 21.15. There is no dedicated seating so make sure to turn up prepared! Rugs and cushions are available to buy onsite in emergencies. There are some great double and triple bills being screened if you really want to make a night of it!

view the full line-up in detail