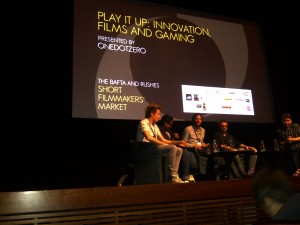 Last Sunday BAFTA teamed up with Rushes Soho Shorts for the annual Filmakers’ market, which marks a grand day of networking for rising film-makers.

While the day was packed full of various debates and discussions, one which proved truly interesting was Play It Up: Innovation, Films and Gaming. Presented by onedotzero, this debate explored the ever interesting topic of video-gaming and  motion picture collaboration.

Both graduated talked of their inspiration to create such a phenomenon at the Play it Up seminar. Abraham says: “We were always talking about crossing films and games but the technology wasn’t quite there. But we knew we wanted to cross  different media platforms.” Maggs added “We wanted to create live action with portable media devices, so we worked trans-media by adapting to the platform.”

Timedancer is delivered in a 5-episode season and is advertised as somewhat of an interactive app but the creators refuse to brand the product as  neither a game or film, but rather an amalgamation of both. The pair used the panel as an opportunity to describe how users can appreciate a comfortable cinematic experience while also experiencing the conventional gaming qualities in Timedancer. “We give the user the element of choice where they get the chance to explore different characters and as they make concious decisions, the game changes accordingly.”

The panel interacted with audience members to discuss the future of both gaming and movies merging, and quickly established that in the YouTube generation we are so heavily a part of, expectations and user input is constantly changing. Viewers are ditching their passive status’ and are increasingly wishing to become users and active agents to immerse themselves in all types of trans-media.

Log onto http://www.timedancercorp.com to find out more information about the most heavily debated game at BAFTA filmakers’ market this year.