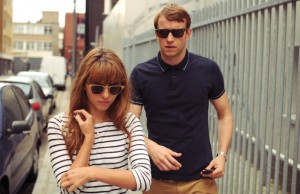 Lee Sales’ directorial debut ‘Turnout’ follows the life of, George, a 26 year old, unemployed drug-dealer, living with his mum in Hoxton. A typical day for him consists of selling weed to the council estate tenants, drinking in his local and sniffing coke at his friend’s flat. George and his girlfriend, Sophie, have been saving up for a holiday. With the money safely in a box under their bed; Sophie begins to shop for the holiday essentials. Unbeknownst to her, George uses the money in a dodgy deal. After the police arrest one of his ‘business associates’ he realises there isn’t any hope of retrieving his cash. To try and get the money in time, George delves even deeper into the world of drug dealing and starts flogging cocaine around his estate for a high price.

Turnout is a victim to its lack of likable characters; specifically George himself. The characters are council estate bums who live in the pub and snort cocaine as often as possible. Due to this, they fail to gain any sympathy. It is, however, saved from being overly self-indulgent by Sales’ focus on the negative aspects of the druggie lifestyle. It is not stylised at all – overweight men waddle from their flat to the pub, drugs in their back pocket and a string of debt following them. The lack of morality in the narrative is balanced to some extent by the representation of almost all the characters. There is no sympathy, envy or likability in any aspect of the story. After the film’s conclusion, drink, drugs and girls seem unappealing.

Sophie stands out unintentionally among the other characters, simply because she has a job and dresses respectably. She grimaces with the audience as she is forced to watch her boyfriend succumb to drugs and make a fool of himself around his friends. Her involvement also enforces the important message that living like George becomes a downward spiral and is nothing to aspire to. A significant moment is when she says “you’re going to go out and get stoned every day are you?” to which he casually replies “that’s what holiday’s all about”. Sales shows a clear contrast between George at a nightclub dealing drugs and Sophie sitting at home on her own. George Russo who plays George does a great job of acting drugged up; his face drooping and lopsided a one point.

Referred to as ‘a slice of London life like you’ve never seen it before’, Turnout aims to give a different perspective to films like Kidulthood and Adulthood. With these films, the problem was their stylish nature and the potential influence they had. Turnout is clearer about what is right and wrong but it fails to engage in the same way. It is nice to see the film open with a couple intimately embracing; in comparison to Adulthood’s opening sex scene but this comes across as much less hard-hitting. Turnout’s level of maturity doesn’t even reach a standard that makes it the real ‘adult’ Adulthood. ‘blud’ has become ‘bruv’, hoodies have become tight polo shirts but really it’s the same basic idea.

Ben Drew (rapper ‘Plan B’) has a pathetically minimal appearance for someone listed as a star of the film. During his small amount of screen-time all he manages to do is scream, wave a blade and shuffle overdramatically on the spot. He doesn’t even make a contribution on the soundtrack. Regardless of this, the soundtrack is actually quite impressive. The title track gives a solid finish and great atmosphere to the film. It’s booming beat and harsh vocals portray the grimy street feeling very effectively. The mixture of this and some softer music give a smooth transition as the story progresses.

Turnout’s flaws are balanced out to some extend by its focus on what is morally right. The main character is not a hero or icon; he is a loser whose flaws are being exposed. The highlight of the entire film is when his girlfriend says “why can’t you just be like everyone else and get a job”. Took the words right out of my mouth…