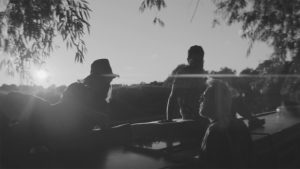 Four friends hire a barge. Three days of exploring Southern England waterways are ahead. Bringing appropriate amount of  obligatory booze, food and feelings along. Jon (Jon Foster) and Zooby (Jamie Zubqiri) are leading the way. One is coming to terms with his life and the other is trying to become human after a child is born. Meeting Red (Robyn Isaac), along the canal,who is staying only a few hours because the wedding of the year calls. Simon (Simon Meacock) is the last to arrive, but brings news and booze to firm up the supplies. The themes of maturity, isolation, repression and inversion are richly explored in a slow moving and sun drenched space. We are asked questions, given answers and other factoids that might leave us saited or more so, compelled to better. Tupaq Felber debut is a powerful film that slow burn allows room to breath and time to resonant with the viewer. 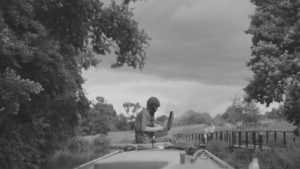 Much can be said about Tupaq Felber debut film TIDES. Some have called it a masterpiece of naturalistic film, others a laid back, low key piece. These descriptions half explain what is going on both behind and in front of our eyes here. For me it can be seen as the successor of the great works of Ozu, Wenders and Cassavettes. It marries the visual space of their art house cinema, with a narrative discord. Alongside another thing I admire, a genuine love of actors. Now some will say that Felbar lucked out with four great actors, all connecting and zipping off each other. The outstanding photography of Paul O’Callaghan. The black and white, lovingly absorbs the surrounds without making it feel fragmented or over burdening the performers. 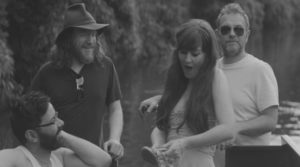 But it is Felbar who deserves commending here. He allows all the actors to bounce off each other. Working through each others performances to mould their own with subtle inflections. The DOP is allowed also to shine because he brings into focus space and ‘air’. Less spoken of is the near silence soundtrack that is awesome in its control. Felbar would be the core to all this. It comes from a director who knows when to hold and when to push in or reframe. 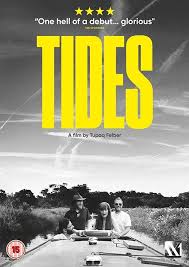 So the best extra is the Q and A. All the cast and director are there. They muse on the film, its pacing, ideas, visual style and above all we see the chemistry is palpable.