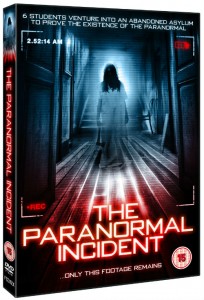 With the title The Paranormal Incident, it’s likely the mind will immediately leap to the ever popular Paranormal Activity trilogy. Apparently, freaky incidents captured on shaky hand-held cameras are where we find our creepy kicks these days…

Plagued by a surreal montage of disturbing snapshots, John (Oliver Rayon) wakes suddenly to find himself in a hospital bed. A furtive official, Rebecca (Amanda Barton) informs us that John is the only survivor of his six friends. Battered, bruised and covered in their blood, the blame lies with John, unless he can call upon his fragile subconscious- and the recovered footage -to prove otherwise. We are transported back four days, where the story surfaces.

In a bid to gain an ‘easy A’ in class, a group of students embark upon a project to gather film footage from within the grisly walls of mental institute, Odenbrook Sanatorium. A macabre account of a mass suicide shrouds the infamous haunt in mystery, intensifying the feeling of trepidation. Half the group believe in the paranormal, the rest are sceptics. Our gang of Scooby-Doo scare searchers are fairly likable, perhaps with the exception of the all-American ‘arrogant jerk jock’ and his ‘blonde bimbo’ bit on the side.

The faux freak-outs are unleashed almost instantly as a snake slithers away from the Sanatorium entrance, sending the students screaming before they’re even inside. Once the project is underway, a number of gruesome facts about the institution add to its foreboding. One such unsettling story tells of patients having their teeth pulled out without pain relief as punishment. Despite the chilling tales, the suspense struggles to build. When we’re on the verge of frightened, we are pulled back to the safety of the hospital room. John’s interrogation lacks impetus, tending to trail off (revealing his secret love for fellow gang member, Tess) and is strangely reminiscent of a scene from an old soap opera.

Upon returning to the action, we are bombarded with disjointed information that fails to aid the progression of the potentially juicy plot provided by the Institution’s creepy past. Instead, we are subjected to repetitive scenes as we watch the group bicker, relentlessly scare the bejesus out of each other and deliver all the usual ‘Did you hear thats?’, ‘What was thats?’ and ‘shall we split ups?’ to last a lifetime. As we already know; the gang are gonna get it. They become the play things of an unknown ghoul (possessing its first victim and bizarrely taking on the voice of the late mother of another) yet the murders ultimately lack impact-partly due to their incoherent nature and underdeveloped build up. A twist ending causes further confusion and only serves one purpose- to be shocking for the sake of it. While all the elements for a scare fest are there, they are as underused as the unnecessary subplots are overused.