The forest of pine, secluded on the beach and off the coast in the United States houses a castle of external splendour. Within this castle is the shells of soldiers that have lost their minds and are under treatment. So as the internal abandon of the place decays and the soldiers world become more and more bizarre, Colonel Kane is sent to bring order and balance. He however might be as mad as the others or more sane than can be imagined.

They say football is a game of two halves. Well The Ninth Configuration is that sort of a film. Hilarious farce in its first act and through to its second. This plays on the madness of the characters and the constructions that shaped people and place of One Flew over the Cuckoos Nest. At times it is so funny as to be achingly so. Then we move to the second act middle and the tone flips. It becomes a horrific murder mystery/ psychological thriller. This is crazed in places, distorts the viewing experience and makes it jarring and disjointed for some. 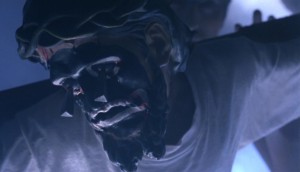 However lets be honest. The film is excellent for a whole host of reason. Well shot, edited and interesting visually. At moments it considers the idea of what being sane means, at others it meditates on religion and then at others it plays on the ideas of the harmful effects of selfishness and self interest. The play between good and evil, God and faith or the selfish gene and the altruist are all in play and bounce off walls of stone faster than an atom. Each hit notes and ideas but also leave questions. What is love, evil, death and above all the purpose of our being. This is al captured to varied levels of success by the players.

The cast are worth noting for their work not only within this film but for where you have seen them before. Take Stacy Keach, who is no stranger to Cult films that are a little messy. He provides a very erratic and intense performance as the lead Colonel Kane. Jason Miller or Father Karras from Exorcist. He is funny and plays the role well. The Shakespeare for dogs sequences are very funny and also push it over the edge of sanity. Scott Wilson is also just on the wrong side of crazed. Ed Flanders found great fame and was excellent in Salems Lot. Here he is the sane point in a world of absurd insanity.

So if you like films that are not disasters but need really fine analysis or films that have cosmic shifts in them and make for discourses that can be pole opposites then you have it here. It is Cult cinema writ large and as such if you want adventure in a viewing experience then I can recommend it but if you like coherent cinema, well run for the hills. The DVD has been lovingly taken care of by Second Sight. The Kermode intro, Audio commentary, Interviews and deleted scenes add so much depth to a film that has a very distorted vision. I will stress that film fans will love this but the casual or gentle viewer will be left numb…