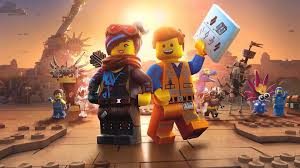 Featuring a host of  familiar voices, faces and copy written characters,  THE LEGO MOVIE 2 : THE SECOND PART comes to our screens in its second outing.  Much is taken away from its first and frankly better outing. We retain the non stop thrills, action spills, verbal kills and music drills of the bricks. But as the song now goes, ‘Everything is not awesome’ and it is more pertinent then even it knows. Five years has past since the first film and the world is split between Apocalypseberg and Sistar galaxy. 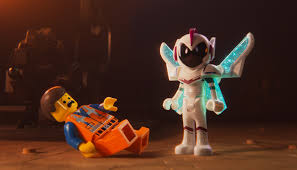 Our hero Emmet (Chris Pratt) is happily roving around the place, when an attack by Duplo (Another LEGO product) blocks, ruins his day. You see Lucy (Elizabeth Banks), Batman (Will Arnott) and an assortment of friends have been kidnapped and taken to the Sistar galaxy. So Emmet needs to build a spaceship, cross space and fly through known universe to their rescue. In order to do this though, he has to toughen up and sort out a few of his person issues. 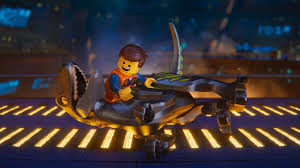 I loved the original film. It was clever, well directed, produced and written with an eye for sardonic and nods to cinema. The sequel was under a lot of pressure to match this. As the titles rolled, the cinematic nods were there, MAD MAX, MARVEL and Musicals all get nods. In the first ten minutes. Chris Pratt plays himself. Elizabeth Banks the same. Then Will Arnott does his Batman thing (the best thing about the series so far is him). But it just felt heavy. 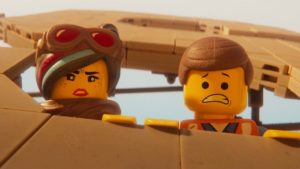 Gone is the clever visuals, witty screenplay and irritatingly catchy songs. Instead we are left with a duller, emptier version. Saved only by some very good side characters. The film seems to know this and compensates by a variety of weak in jokes, fast paced action scenes and breathless narrative. It leaves you bewildered. It leaves you very befuddled. Kids will love it. Flashing along at the speed of mobile device information and keeps their heads at the big and not small screen. As an adult, sit this one out. 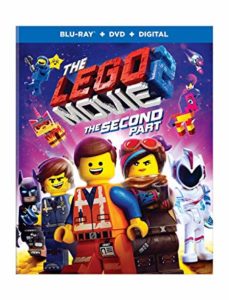 No I will say nothing about the 4K because it is cinema worthy and so I shall stay silent. The best extras (and there are two)

For Adults and film fans, it is the commentary with all crew speaking on it. Mitchell talks the first and matching up, Lord talks about producing and is very good as one so adds details worth time.

For Kids it is the sing along version. It adds a new twist for the film and makes the return watches more fun…

Everything Is Awesome Sing-Along They Come in Pieces: Assembling

The LEGO® Movie 2-Discover a whole new world of bricks in The LEGO® Movie 2, as the cast and filmmakers reveal the secrets behind every piece that went into assembling the film!