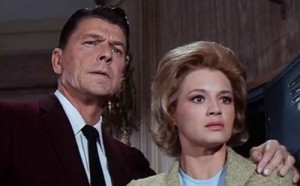 When it comes to 60s crime films, Don Siegel’s reimagining of The Killers is by no means a disappointment. From the get-go, the film never seems to be concerned with living up to the standards of the 1940s Film Noir classic. Robert Siodmak’s version is much more faithful to Ernest Hemingway’s story but it’s refreshing to see that Siegel chose a different approach for his version. The Killers abandons its Noir roots for something much flashier and its vibrancy is really brought to life through the bluray transfer. It is a film of its time and thrives on its absurdity – John Cassavetes and Angie Dickinson race each other in go-carts, Ronald Reagan plays an abusive criminal, and every love scene is layered with B-movie dialogue and an overpowering score. This does, however, make for a rather enjoyable viewing experience, especially as Siegel is so aware of its place in popular cinema and doesn’t even attempt to re-create the brooding seriousness of the original.

Lee Marvin and John Cassavetes are equally good in their roles, although it is a bit of a shame that Marvin doesn’t have more screen time. The casting of Angie Dickinson is possibly the most problematic element as she always seems a little too innocent for the femme fatale role. The character development leaves a lot to be desired but by the end of the film it doesn’t really matter. The Killers embraces its 60s vibe and the final product resembles an early James Bond film more than a slick Noir. There are a lot of surprisingly funny moments including practically every scene with Ronald Reagan in as a villain fighting to keep possession of his woman.

When compared to other notable crime films of the 60s, such as Bullitt and The Italian Job, The Killers can seem to miss the mark at times, as its pacing is all over the place and some of the love sequences are laughably cringy. Although this is all made up for by Marvin’s screen presence, a decent heist sequence, and Siegel’s assertion from the beginning that it will be nothing more than a bit of fun. This would be a great companion piece to John Boorman’s Point Blank, also starring Marvin and Dickinson, which has a very similar vibe. It is bound to be compared with the Siodmak version, Siegel successfully manages to fill in some of the gaps in the original, but tonally it is a very different film.

The Killers has been given a nice glossy transfer and the special features, adding up to about an hour in total, are worth watching.

Released on the 24th February.