The Hound of the Baskervilles DVD review 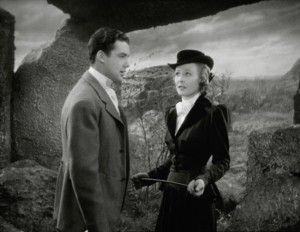 The history of the Baskervilles is dark and murky but now the current Lord Baskerville has lived at their estate and its famous hall for most of his life without problem. He is a simple enough man with little connection to the outside world. He does love to walk across the moor however and one night while returning he is attacked by a hound many believe is from hell itself. He dies and the family house moves to the possession of a young American who is the last surviving member of the family blood line. When Sherlock Holmes is asked to help the future Lord of Baskerville hall return to his new home and see to it that the myth is exposed as nothing more than fantasy, he jumps at the chance of proving this. 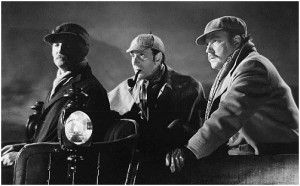 Can we go any faster?

1939. Hollywoods greatest year according to many. It saw Gone with the Wind, The Wizard of Oz, Wuthering Heights, Stagecoach and of course Dark Voyager. So it is no surprise that this film version of a timeless hero is highly regarded. Well for me this is the best version of Sherlock Holmes within a country mile. It has the excellent Basil Rathbone as the detective. He has a great presence and voice that embodies both strength and intellegence. Nigel Bruce is also great as the bumbling and naive Watson. The cast in total is fantastic as the well trodden story goes and Mr Carradine is the highlight. 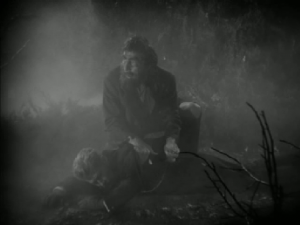 This place is crap for fishing…

The great parts of the film do not stop here. The film is also superbly directed. Even if you consider that it is by a solid yet not adventurous director, it still has great uses of visual space and image construction. The smoke and tight focus on the moor add to tension but also hide the lower budget well. It has a natural ability to keep you entertained because it tells a familiar and well known story with care and craft. The script helps here and should be acknowledged as a good piece of film art.  Now the DVD and Blu Ray itself are both great. The Blu is visually better but the DVD transfer is very clean and the print has been kept well. The extras are limited but they are informed and add extra body to the films character.