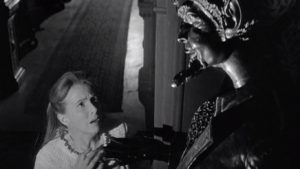 Taking us to the edge of sanity and then flinging us over, this is the psychological horror classic which though dated is still a thrilling watch. Dr. John Markway has been granted access to the often said haunted and even more often seen death Hill House. Markway wishes to study Hill House and its paranormal activity, so he invites a group of people to the place. In the end only three agreed to attend. Once they arrive and settle down for the night, everything goes bang and bump in the night…

Coming off the back of a best picture win fro West Side Story, Robert Wise made this contained and controlled thriller. Its a real skill to see a director take what is an above average script and imbibe it with a malevolence, so creeping that you feel it on your skin.

The Haunting can cut either way in fairness. For some they might not commit to the house and its unsettling aura. They might not get the dark hues of female desire and despair. If not then, that’s you. For me bar the sluggish pacing, it is a great film.

The disc has some issues. The print is pretty much the same as the one on the previous disc bar it is on Blu ray. Blu helps the black and white sing but wear is evident and its not great. The commentary has been heard before. Though it is very good, with Wise a real charming presence. 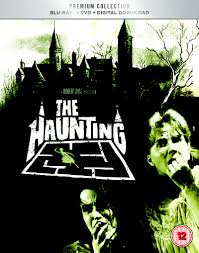