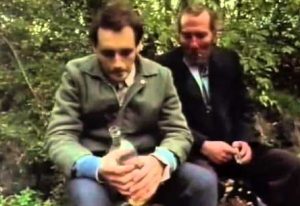 Originally a part of the Screen to Screen series, this was inspired by the book by John Healy. A journey from the gutter to the seats of a chess championship. John Healy (Mark Rylance) hailed from a religiously pious family in north London. He started out with youthful vigour, fighting in amateur boxing matches and winning. He drinks at this point to sooth his chronic back pain. As his boxing bout increase in volatility, he soon falls victim to alcoholism. Healy takes to the “Grass Arena”, parks where alcoholics live by rules far removed from those of civil society. From wine drink binges to rain drenched parks, he keeps at the bottle. Friends are made, ‘The Dipper’ (Pete Postlethwaite) for one is a close associate. However as the drink takes over, time disappears. Fights ensue and Healy is arrested. In prison he gets into more fights, loses teeth and finally is released. John is put of trials of the drug Antabuse before being taught by a fellow inmate chess. Redeemed by the game, Healy survives.

I first read ‘The Grass Arena’ on its re-issue. It is a

haunting and harrowing work that still to this day has a profound resonance with me. It captivated the reader in a world both alien and familiar. In this adaptation some of the novels situations and circumstances have been simplified.

The relationships have been revised and the horrific central scene has been significantly dampened. This all said, the film however captures the more lyrical pieces of Healy and his more personal insights into his families relationship and the demon drink. John Healy becomes a complex person, who it appears became a victim of circumstance and society. Mark Rylance is exceptional as Healy. Making much of the roles deeply uncomfortable slide into oblivion easier by crafting the person as they sink. Rylance Healy often seems weighed down with the inevitable conclusion of life while still remaining connected to real life. Locating a person behind. Expressing pathos and emotional vulnerability, alongside strength and stoicism.  Humanising the wretched man and his wretched life. When he overcomes the drink and becomes a chess champion, you feel elation. The overcoming of this burden is so satisfying to watch because he makes you care.

The disc has no extras.