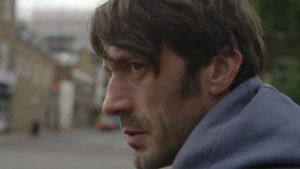 Time is a complex and catastrophic thing in Gareth Tunley’s puzzle of a film. Bouncing around narratives of identity and pyschobabble, it delights in you never having clear footing into its mindset. Revolving around themes of depression, isolation and the power of control, THE GHOUL  fractures time and space to distort fact and fiction.  From identities and existence, anxiety and rationality to the line between the known and unknown, we are treated to a web that leaves you jarred but the better for it. 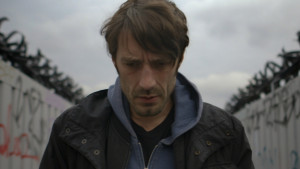 The murder of two people in a house in suburban London has the police perplexed. Both shot multiple times while walking toward their victim, perplexed the police. Detective Chris (Tom Meetan) has little to go on. The only possible lead is Coulson (Jones) a ghoul who loiters around the crime scenes of London. He could have something to do with it. For Chris to get close to him however he must connect with psychologist (Cusack), who is examining Coulson. 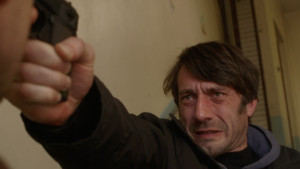 His profiler friend (Lowe) tells him that he should feign mental illness and find out why they were killed by accessing his confidential notes.

British horror cinema has returned full circle to it’s roots. The Occult has left a legacy or in my pinion, a handover because it allows for film makers to make films that are unsettling yet very cheap. Ben Wheatley ( I am not a massive fan in truth) is a film maker that fall squarely into this and no surprise he produced this film as well. The films strengths and weaknesses in many respects are due to this legacy and its baggage. 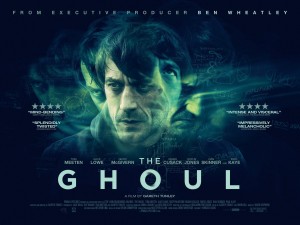 Why? Well its weaknesses. We know it’s devices and conventions. We know what it aspires for and how it will express this. Its a fairly well walked route and that can be dull if not handled well. THE GHOUL has a firmly expected trajectory because of this. Malaise and depression weight down the piece and this moribund feeling could make it feel like a dirge. Often that gloom is what makes this British horror film so good and so awful. However to read it as this is to be mistaken. You are to feel like watching is an act akin to the ghoul Coulson. This is actually the films greatest strength. 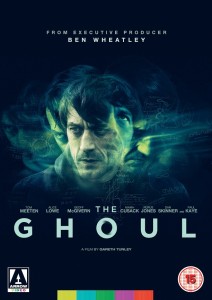 It is a skillful translation.THE GHOUL excels with visual skill, editing swagger and a very talented cast to keep that ambience whole. It also keeps wrong-footing you with memory and reality. Illusionary dream crumbles with uncertain returns to spaces known. I found that if you detach the prior and overlook the genre limitations, you find the film both visually compelling and its disorientation satisfying.

Discs best feature is the commentary. Little else adds the value as that does because Tunley unpacks the film for his audience and does so with vigour.