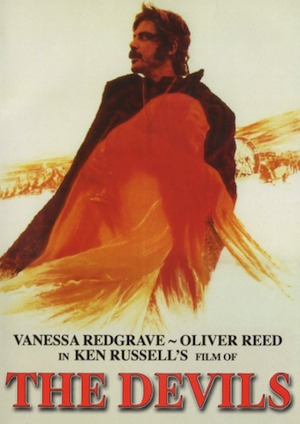 No one ever accused Ken Russell of subtlety. His films are masculine and fierce, but also poetic and sumptuous. Like him or hate him, he had a natural eye for extraordinary vistas and was fearless in presenting his vision onscreen.

The Devils is probably his finest film. Enormously controversial not only when it was released but even to this day, it is based on the Loudun possessions in 17th century France. In 1632, a convent of Ursuline nuns allegedly underwent a period demonic possession, causing convulsing, cursing and disorder. Several attempts at exorcism failed, until the nuns accused Father Urbain Grandier (Oliver Reed) of colluding with the devil and causing the possessions.

Several theories exist as to the actual cause of the events (including the notion that the sisters were poisoned by ergot, a form of fungal infection), but the prevailing (and most credible) one is that the nuns were in cahoots with political allies of Cardinal Richlieu, who viewed Grandier as a threat to his position, and that the so-called possessions were in fact a plot to discredit and rid the city of him.

Russell focused on this last, saying at the time, “[This is] my most, indeed my only, political film.” He even described it as “a film about brainwashing”. Like Arthur Miller’s The Crucible, its historical setting is almost incidental: its themes and truths are timeless. Yet it is also intensely personal in parts: the tale of Grandier is that of a man in a position of power who is both a libertarian and a libertine, yet who has at heart the best interests of the people under his care, and who is ultimately redeemed by love. 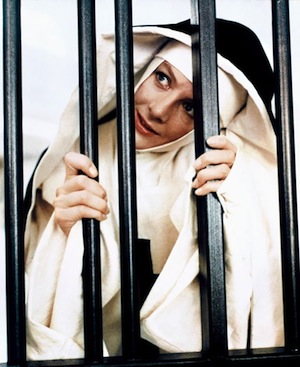 The film gives equal time and attention to Sister Jeanne (Vanessa Redgrave), the Reverend Mother of St Ursula’s. From the outset, she already seems decidedly unbalanced – giggly, impish and girlishly wicked for someone with such a responsibility. As Jeanne herself explains, most of the nuns are there not out of pious devotion, but because they are too poor or too ugly to be desirable brides. She herself, although shrewd and extremely pretty, is cursed with a terrible hunchback – an affliction which causes her to carry herself with head cocked to one side, emphasising her glittery, brittle weirdness. Despite never having met Grandier, she has heard of his attractions and becomes fixated on him to the point of mania. One by one, her charges follow suit.

The Devils is graphic to say the least: at the time of its release (despite many cuts required by the censors), it caused an uproar in conservative – especially Catholic – circles. Russell’s adaptation of DH Lawrence’s Women in Love two years previously probably prepared most people for the wall-to-wall nudity, but some of the depictions of blasphemy and sacrilege proved more than the censors were willing to accept. Much of what was cut to allow the film the R-rating with which it was released in the United States (the only version that has been available anywhere for the best part of 40 years) has been reinstated for this new release. In one early scene Jeanne, in a quasi-religious state of ecstasy, fantasises that Grandier is Christ on the cross and she Mary Magdalene at its foot, performing a pretty unambiguous impression of cunnilingus on the wound in his side. As the possession spreads, the nuns become more and more unrestrained, culminating in a frenzied orgy/exorcism in the church itself. 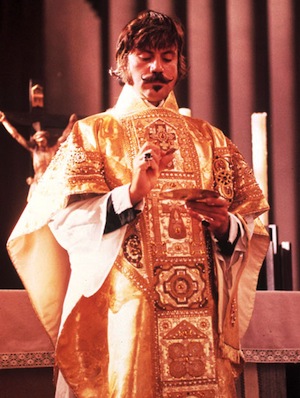 For a film made in 1971 it has aged remarkably well. Apart from the inappropriately cutesy rainbow-light in the cathedral (meant to evoke sunlight through stained glass) and the fact that exorcist Father Barre (Michael Gothard) looks anachronistically like a rockstar in his Lennon specs, the film remains accessible on every level.

Derek Jarman‘s extraordinary sets, theatrical and gleaming white, were designed to reinforce the sense of “a rape in a public toilet”, but they serve two other purposes. First, the high-walled city creates the impression of a sanitarium, sterile and claustrophobic – and chock-full of brooding insanity. Second, Russell was determined not to make a crumbling period drama: “These were modern people, and to them Loudun was a modern city,” he explained – and the place does, indeed, look brand new.

This is not an easy film to watch, even for those who have endured 1979’s Caligula and lived to tell the tale. However, unlike the Tinto Brass movie, there is nothing gratuitous about The Devils. It is powerful, devastating. Reed and Redgrave give career-best performances and the supporting cast (including Gemma Jones as Grandier’s orphaned true love) is excellent. Grit your teeth and give it a go – this is Russell’s magnum opus.

The Devils – Special Edition is available now on DVD from BFI Video with extras including a commentary by Mark Kermode, Ken Russell, Michael Bradsell and Paul Joyce; documentaries; Ken Russell short Amelia and the Angel and a 40-page booklet.