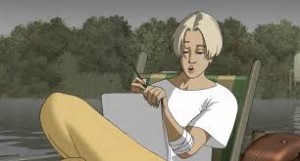 The world of Belgrade in 2074 is starnge and unexpected. It has hover cars, drugs and chip implants. Teddy bears that talk, pevvy teachers and exams that just go on and on. When however a stolen military implant ends up in the body of Edit it all becomes too much. The chip has a power of its own and as it becomes fused to body and mind, so Edit will have to take on herself, as well as those who want it back.

Well done to Aleksa Gajic. This is a superb version of his graphic novels, of which he is rightly applauded! The film has taken much of his very interesting ideas about the near future and played them out to a very intellegent reflection. The ideas about our use of technology to escape from the mundane. The use of robots as our companions and our friends. The thoughts on information and its power to build on society, a barrier. This is essential to understanding the future.

So the film as a whole looks good. The DVD has no extras of note but it does have the animated film. This is really worth a punt on. It has a few poorly executed sequences. None other than the motion sequences that have been dulled by weak animation. This is only a budget issue and an issue that we should see as a problem of place. A place that is not know for animated cinema. Please over look this as it is so worth a watch.