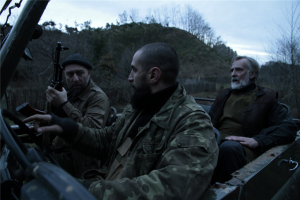 Georgia is at war with Russia over the break away region of Abkhazia. Margus and Ivo have some tangerines that they need to harvest and refuse to leave this land. Well it has been there land for over 100 years and they are ethnic Estonians. This means that both sides arent so sure which side they are on. Then a skirmish sees a wounded Chechan and Georgian taken into Ivos home. He wants to be that great thing, a human being during war and care for both men. They however hate each other and can barely supress this, crossing blows and words. 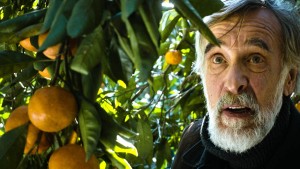 Great films often meditate on Humanism. During war it is hard to imagine a hand being streched out to help another. Is war devoid of humanity? Tangerines ponders this idea and does something that you would not expect. It shows an age old tradition of cultivation and then we add layers. Ivo played by Lembit Ulfsak and he is excellent. Warm, human but an enigma and this add to the films power. He along with Ahmedplayed by the superb Giorgi Nakashidze, make the film. Giorgi adds humility to a man that often would be cast as a monster.

We see are leads embracing hope and connecting over divisions. It is tender but very real. In fact all the cast are extremely good. They make a film which could have been seen as a soft hallmark film and give it punch and soul. We have comedy, tradegy, friendship and even a glimmer of reconciliation. The disc has great features. This adds to the experience of the film and makes your money go on and on. I can say it is all very very good.