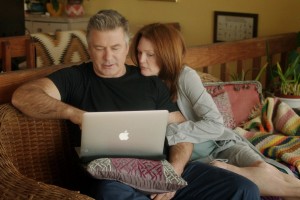 Home is where the heart is...

Dr Alice Howland is a well-educated woman. She has worked incredibly hard to rise to a position of respect and admiration. In her life she lived more than anything for words. They defined her job as a doctor of Linguistics and her passions for understanding where and how we learn to speak. They also are pivotal in her family life and her whole world is defined by how she can articulate it. So when she begins to lose the everyday function of speaking and consults her neurologist, things start to change. She is diagnosed with early onset Alzheimer’s. The progress is bleak as the advance progress of the disease is so rapid as to prove uncontrollable. Can Alice remain at all within the life she knew and hope for at least some time with her memories and family?

This film grew out of a novel by Lisa Genova and a play. Both of which were major hits and the book garnered very positive reviews and the distinguished Bronte award on its release. Though not based on real life events, the feel was that it captured the deeply complex emotional and physical pain of Alzheimer’s, as well as the continued effects it has on a family dynamic. Hollywood often produces films like this and often they are packaged in a way to bait awards and connect with empathy for a specific cause. In the last few years we have seen Aids treatment, euthanasia and Bi Polar disorder all given the Hollywood treatment. This is not to say these films are not supporting worthwhile causes. It is more to suggest that producers know how the game should be played. Productions are scheduled to fit into the awards season and sometimes this makes for a dampened response. 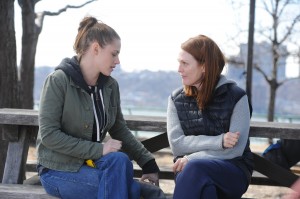 Mother and daughter speak of love...

This film didn’t suffer from negative audience reactions or hostile press. The reason for me would be that the lead performers, Moore, Baldwin and Stewart in particular are exemplary reflections of magnificent acting. Moore has the central performance and the film to hold up. In this regard her enactment is almost flawless as Alice. She gives her a complexity of emotion and a weight of feeling that you find hard not to find some pathos in. Her life is becoming fragmented and Moore balances it so well, with moments of anger mixed with futility at the turn of events. This would have been over played by other actors. They might have focused to much on the symptoms but Moore focuses on the person. Baldwin has a very gentle way of acting and it works well here. He has taken away the bold performances of before and given layers to a man of intelligence and loss. Stewart also has found her mark. She was always seen as a bit wet and here it is cast aside for a bolder and more stoic self. She comes out as an adult that has commited to her family struggle over self. 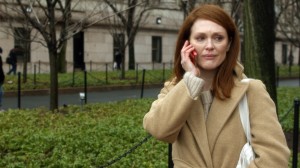 I am still here

These performances are also enhanced by an unexpected but sublime set of craft used by the directing team of Wash Westmoreland  and Richard Glatzer and the musical team. They used gentle soft focus touches to express the displacement felt by Alice. These are progressed over the course of the film and are so well introduced and not forced. The use of to camera filmed pieces with Alice personalise the events and the Ozu hold on nature and space have us boldly engaged to the piece. The problems only come about at one point and are with the stedicam which they should have done away with. The score also is deserving of note as its simple yet gentle notes are so tense as to grip you.  They do not over compensate for drama and so become soft enough to complete the package.

Overall the film is a master stroke of cinema. It is a tale of the pain of suffering and the power of asserting your strength. The film will be rewatched and again will please the viewer. It is not designed to be a tear jerking piece of Hollywood fodder. It is designed to tell us that illness is a barrier but one that cane be overcome with patience, love and hope.