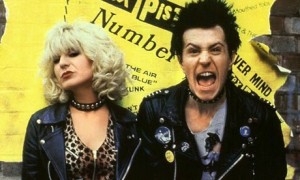 Si Vicous and Nancy Spungen were as destructive and productive a couple together as they were apart. The bass player of the Sex Pistols could not seem to live without the whirlwind of creative destruction. He was in a band that was imploding, he was fractured in self and then he met Nancy. Nancy was a hanger on maybe, a drug addict and a circle of self. She made Sid into an image but also a drug addict. He inturn then took her to the edge and pushed her over into the abyss. 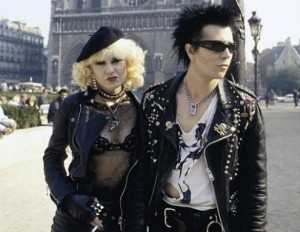 Alex Cox could be said to have been the most under rated or under appreciated film maker of his generation. I say this less because I love the man as a creative force and respect his power of intellect. He makes films that are not devoid of genre trappings but subvert them like a radical in a sweet shop. So we have traditional bio pic framing with rain showers that do not underline emotional power. We have a murder that is like a love scene. This is not his masterpiece in truth but it is a powerful and very engaging look at the destructive power of art, selfishness and creativity.He uses his talent of tone and technique to refresh the bio pic and reinforce its omnipotent eye. 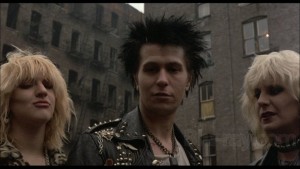 Also of worth are the leads. Oldman is the star of the show by a mile in truth as he gives waves of power in a performance that could have stunk of ham. His explosion is well balanced with Webbs under performed but still tragic Nancy. The disc has great extras and the Cox discussion is a delight. He is so informed and engaged as a commentator. I also love Deakins interview which adds levels and layers. The restoration looks great and the grain on the film adds a touch of sleaze!