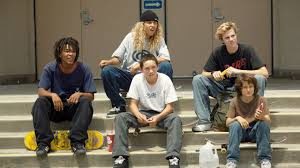 Jonah Hill’s directing debut, is a coming of age comedy drama (with an accent on the drama) that has sprinklings of his own life in the mix. MID90s delves into the world of LA skating, a place filled with isolated kids looking to bolster their teenage dreams with the bored and play it off against the desire to break out of troubles. Using a Verite style that feels as if it wants to nod to THE BICYCLE THIEVES, the Maysles Brothers and the indie works of Richard Linklater, it sometimes achieves that rare thing, truth. 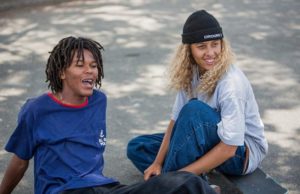 Stevie (Sunny Suljic) has to contend with an ass hole of a brother (Lucas Hedges), who he idolises and a single mum (Katherine Waterston) who is desperate for love. Los Angeles in the 90s is a hard place to live in. His family is unbalanced and his older brother is becoming more abusive. School sucks and he has few friends to care about it. When Stevie befriends a crew of skateboarders, working at the local board shop, Motor Avenue boards. He learns that the lives of others is harder than he expected. But also that the board sees no privilege, just the ultimate crafter and their skill. 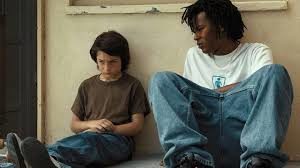 Not very hard to see that Jonah Hill knows what he is doing both in front of and behind the camera. He directs MID90s with the gait of a neo realism piece. Its toned down visually, the scripts dialogue feels mostly ad libbed and the performances simmer along without crashing. Its best when it allows Sunny Suljic or Lucas Hedges into the mix. Both have an emotional rare quality and Hill directs them with patience and poise.

Where the film fails however is where it feels contained. Via the dialogue, which is made to become heavy when it wants to extrapolate plot points or beats. The most telling scenes are with the skate kids and the lead talking about ‘points’. This lacks nuance and instead sometimes feels forced.

MID90s is the sort of film that will covert awards but it’s not as emotionally powerful as BICYCLE THIEVES, not as character contorting as Robert Altman’s films and lacks the grade of Linklater’s more defined work. It shows Hill is a very good director and should maybe move away from his own pen and to that of other, more weighty writers to glean great depths of cinema. He could then look at the film as a blank canvas. A thing to make his own.