A young girl. A silent world that she lives in. Mandy is deaf and schooling is hard in 1950s England. Her parents want to give her a chance in life but the times they live in are not helping. Mandy is special however and can do more than others believe. They fight for her to get a chance in life and she might just prove that she can get one. 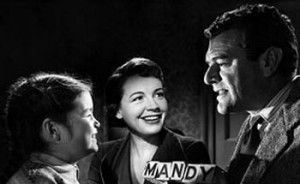 Alexander Mackendrick is a British film institution by his own merits. He has a body of work that would and is the envy of far better known and liked film makers. This is one of his best films. A hard and fairly told tale. It uses emotion but doesn’t abuse emotion. It uses melodrama but stays on the side of drama and less on the melo. It feels compelling in its story telling and its visual makeup. It feels like you are in it due to a great sound setup. It gives you the optimism, hope, sadness and loss. It also gives you joy and happiness in every cell.

The Blu ray is a little lean for my tastes. The transfer looks good with some lessening of that awful fuss on previous DVD releases. The interview with Miller is funny and heartfelt like the film in places. I care little for Simon Heffer so ignored him. The still gallery has a few surprises however…

– Behind the Scenes stills gallery