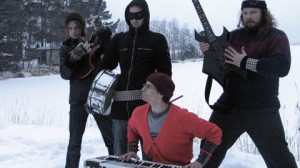 A film about a film; Man with a Video Camera follows Esko Lönnberg as he attempts to capture the creative power of Circle, a Finnish rock band with big ambitions. The bearded man, Esko, also discusses childhood experiences and his passion for art in this documentary, directed by Petri Hagner. The DVD includes the short ‘Naked Sushi Lunch’, another documentary directed by Hagner, following a day in the life of a Japanese man who runs a sushi restaurant.

The purpose of Man with a Video Camera seems lost at times. The mishmash of events and lack of back-story on the rock band make the documentary very difficult to relate to. Hagner also fails to capture any originality or artistic flair in his exploration of Lönnberg, to make up for the unclear intention of the documentary. At times, it feels like a DVD extra where the full story is required to be viewed beforehand. The band itself is uninteresting; if not a little annoying and unpleasant to watch at times. The lead singer prances around stage, making bizarre sounds into the microphone, spittle dripping from his messy goatee. Esko and the band’s attempts to delve into philosophy seem utterly lost among the jumble of concert footage and exploration of nature.

Man with a Video Camera only just makes feature length by the skin of its teeth and fails to engage with the short amount of time it has. There is nothing glossy or stylish about this; it is a documentary stripped bare by Hagner. This approach is deliberate because the short film Naked Sushi Lunch also shows the mundane aspects of life, a prominent focus for Hagner in his work. This approach deserves praise because he successfully highlights how tedious life can be, more so in Naked Sushi Lunch which was, on the whole, more enjoyable and interesting. The close-ups of the man’s face in this short film parallel the blank expressions shown at times in Man with a Video Camera. The entire spectacle is only a snapshot of the filmmaking process and does not try to be anything more than this. It is not pretentious, just tedious. Making the point halfway through that “you have to do things you don’t like in life” and hinting that the documentary does not aim to inform, just show the monotony of living.

Having said all this, the screening of Lönnberg’s film on the band was shown receiving a positive audience response in the documentary. Maybe its intentions are lost out of its home country but Hagner’s attempt has no unique style or originality and doesn’t make a big enough impact to be remotely memorable. The only aspect of the documentary that makes it stand out at all is some of the beautiful views of the landscape in Finland. At one point, Hagner shows Esko looking out onto a construction site, contrasting perfectly with the snowy woods shown throughout the rest of the film.

Too personal to connect, Man with a Video Camera fails to engage and focuses too much on Lönnberg who cries out for attention by addressing his insignificance in the world. It also becomes frustrating to watch, posing the question – why should we sympathise with or even try to relate to these men? The film takes itself too seriously to be anything other than a grim documentary but is not focused enough to do this effectively.

The short film included with the DVD is more prominent and interesting from a cultural perspective.