Chopping up the screen

A group of young people who are over sexed and under sleeped have had a wonderful and rewarding trip to a forest camp. They and their course teachers are spending the final night by a log fire and . They decide to tell horror stories at the campfire to scare and excite the kids. The urban legend about the axe wielding maniac andpractioner of familicide Madman Marz is the kids favourite. It will be ok if only they do not shout out his name. So they call his name as kids always go against good advice and one breaks even into his house. The others return to camp and wait for the sun to come up and then to go back home. This is far from the actual expected plans of the Madman himself. He has heard his name being called out and as he has woken from his slumber now wants to shed some blood… 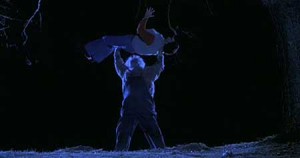 Up where the air is clear...

I have seen over the course of my 34 years a whole stream of horror films from the 1980s slick and dice, slasher and stalk and slay collections. Madman fits nicely into this bunch of films as it is a slasher flick that was made to make money. Many films from that period were designed simply like that and that is no bad thing. But this has another claim to fame. It is also a film that like so many other mediocre and dire fare, got caught up in the Video Nasties moral panic. It wasnt on the DPP list, long or short list that is. It was just confused because it has such a sensational title.This may have been par for the course at the time but some films excelled in titles meant to illicit audience excitement (And perversely this also caused its downfall). These also in the UK caused a very strong response from legal bodies and police. They often were overly concerned about the content, however dubious its quality. 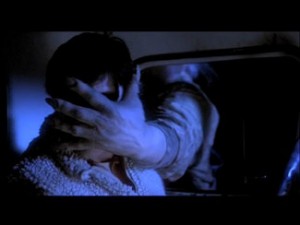 Now as for the film itself, well it is less sensational and more paint by numbers slasher fare. This is not a masterpiece of form or function and nor will it be remebered as a film that should go on lists as a must watch. It does however have some saving graces. The film has great use of cheap film making. In its exposition sequences it uses a very clever and simple tight shot effect to balance the lack of budget and space. It has some geniunely clever tense sequences. It uses night to full effect and keeps that at its core. Then you have the variety of problems. The acting is pointless to talk about as this is fodder for the axe blade. The pace is harder to ignore and that it takes an age to get anywhere seems silly. It creeps slowly along and then finally sprints. This pacing means that the core audience switch off. They lose the focus. Then you have the other issue of it not playing the set up, pay off. It sets things up then pulls out of them.This means that you almost get what you want and then lose out to another idea. Messy stuff indeed.

The disc has a few problems of its own but overall has great features. The 4k is pointless as the print has damage and the reproduction of 35mm that is poorly light by its cinematographer is pointless. The extras make up for this however and listed below is all the wonders available to you!