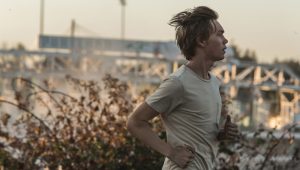 Andrew Haigh has directed 2 films that have both received praise. The first WEEKEND, dealt in a mediated on relationships and sexuality. 45 YEARS look at age and coming to conclusions. LEAN ON PETE is in a similar vain. Albeit with it being a film about a relationship between a young boy and a horse. This is not the only point of interest in Leon on Pete but it needs to be established before we move the discussion on. Charley (Charlie Plummer) lives with an often absent father (Travis Fimmel), takes on a job with horse trainer Del (Steve Buscemi) and loves the ageing horse Pete. Pete is a running horse, who runs on tracks with other beat up horses for a payday reward. Men in his life are little more than problems without solutions. Women and animals are hopeful entities. When his life takes an unexpected turn, he finds hope in the track, Pete and jockey Bonnie (Chloe Sevigny). 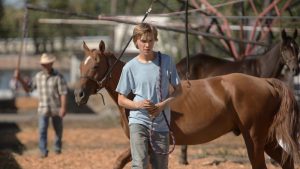 Pete is the star of this film. Why do I say that? Well it is through Pete that we understand the plight of Charley. Pete is left to fend for himself, abused and used. He is also seen as less than others that he comes across. The final indignation is that he is seen as fodder when he is done. Charley is much the same by hook or by crook. Charlie Plummer is excellent. He layers his role with gentle humility and tenderness. This is what drives LEAN ON PETE along. The only issue is that the film doesn’t hold up around him because the journey seems to toil interminably along without finding him a path.  It is this that is the films ultimate undoing for me. It spends to long in the aftermath of the story, preambling around the barren life of a boy, trying to hammer home a point that is made better in the first and second act. Haigh did this with 45 Years. He could find the exit and instead reiterated a point, well made before. 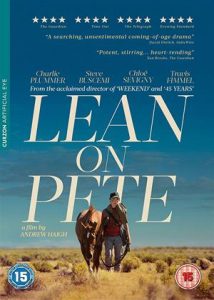 The disc has a lot to offer the viewer. The best of it is the interview. I disagreed with Haigh in his assumptions on Charley and Pete’s relationship. However he is able to transmit ideas with a solemnity and passion.