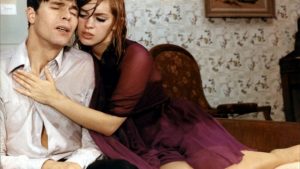 Clouzot final film is a layered piece about attrition and its effects on sexuality. Stanislas (Laurent Terzieff) is an art gallary owner. He is wealthy and lives a detached life in Paris. His friend Gilbert (Bernard Fresson) is an artist in his own right. Gilbert patron is Stanislas and though this allows him to create modernist pieces, it also means a level of leverage. So when his partner Josée (Élisabeth Wiener), a television editor wants to sit for Stanislas, he has to except. This leads to a push and pull, bondage relationship. 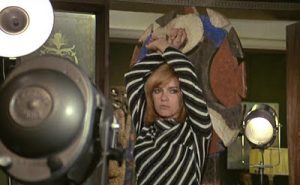 Clouzot understood human perversion. Much like Hitchcock did. As a final film, you couldn’t want any more than for a film riven in complexity and power. He also understood how to translate that to screen. Constructing a world of pain within desire. As also Hitchcock did. Sexuality riven with visuals. 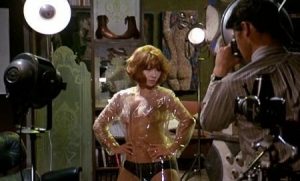 Touch as strike. Touch as sting. Touch as pleasure. Themes so dynamic that its hard not to be astonished at their handling. Inspiring the new wave in its reading. Inspired from the new wave. Lit with Clouzot use of mise en scene. Putting soft object like flesh with hard objects like wood. His use of camera and its harden look at events and that bold acting style.

The disc is a simple piece. The restorations looks good enough but i would like to see the Blu ray. Extras are irrelevant.