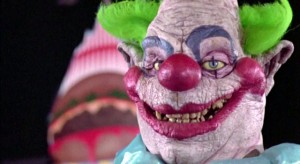 Whoever was responsible for the naming of this film was clearly heading straight for the cult market and Killer Klowns From Outer Space is an unashamedly batty bit of fun. It’s quite remarkable how a film full to the brim with absurd situations, bad acting and the some of the most bizarre plot devices in existence can be so effortlessly watchable.

There’s actually some really great ideas here. The clowns (who are really aliens in disguise) have some rather interesting methods of capturing their prey and harvest them in candy floss body snatcher pods kept fresh in their circus tent spaceship. The interior design of the spaceship is incredibly imaginative for a low budget horror film and there’s a great range of different clown costumes. The kills are also very well thought out and not cheaply executed; death by custard pie is a standout one for me.

The skill of this film is in the way director Stephen Chiodo balances comedy and horror. Despite being funny on the whole it is actually quite terrifying in many ways as well. Even those with the mildest fear of clowns will probably feel unsettled by their unnerving smiles and domineering presence. The simplicity of the music, which sounds like it was taken straight from the demo setting on a keyboard, also helps create an atmosphere of both silliness and discomfort.

The fantastic transfer to high definition really brings out the richness of the colour palette. Watching it on a VHS many years ago was probably a much more underwhelming experience but it’s definitely worth seeing on blu-ray. The special features make it worth a purchase with a range of featurettes, interviews, and even a blooper reel.

Killer Klowns doesn’t pretend to be something it’s not, it’s a niche film tailor-made for a cult audience. The result is completely mindless fun, perfect for days when you don’t want to watch something too challenging.