It Comes at Night DVD review

A film that resonates with an unlikely warmth, lacks that final punch because it plays safe and plays straight. The illness has swept through society. It has so far not affected the three members of one family, Paul (Joel Edgerton) his wife Sarah (Carmen Ejogo) and their son Travis ( Kelvin Harrison Jr). They are living in a house in the woods. When a man breaks in to find food, will this change everything for them? 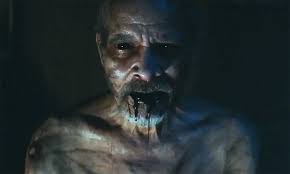 It might not be fair to say that It Comes at night is an overly moral and intellectualised horror film. It certainly is one that wants to have all the trappings of a zombie, apocalypse, plague troupe genre but it also wants to reflect on some weighty Themes. Such as family and its place in society, biological motivations of parents and the nature of good and bad. With such themes however you are going to have to paint broad and long strokes. These can cause the artists to over develop an idea at the expense of the film. Like say Cabin in the woods did.

It Comes at Night falls exactly because in doing the hard part of contemplating these themes, it fails to navigate a clear and unique path in a well trodden piece. Its perfectly functioning but feels like half a film is there for the audience to enjoy. The disc has a very good commentary.