In the Realm of the Senses – Blu-Ray Review

Nagisa Ôshima’s scandalous tale is based on a true event, known as the ‘Abe Sada Incident’, that happened in Japan during the 1930s. The story simply follows the antics of an inn keeper, Kichizo, and his servant, Sada, who early on in the film becomes his mistress. The presentation of their passionate love affair explores the depths of lust and has become widely renowned as being the first film to show explicit sex as art and not pornography. This reputation often attracts the wrong sort of attention but over the years it has developed a respectable status as an art form and was released in the Criterion collection. 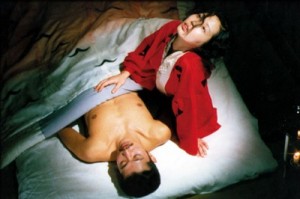 The title ‘In the Realm of the Senses’ implies that it is some sort of hypnotic, sensual journey. In reality, the film takes a much more gritty approach. Its scenes are presented in a less exquisite fashion to those in films about passionate love affairs that contain simulated sex; such as Ang Lee’s notorious romance ‘Lust, Caution’. Ôshima’s approach may be more hard-hitting but he doesn’t stray away from capturing some beautiful moments. The high definition is stunning and clearly shows the bright colours and white snow falling gently on the ground.

In the Realm of the Senses was groundbreaking on its release and it has taken many years for the BBFC to release the uncut version. The content is shocking. Mainly because of the aberrant sexual behaviour and focus on sadomasochism rather than the use of real sex. The sex is very graphic, especially with the use of close-ups at certain points and the entire narrative explores sexuality, with no focus on subplots relating to anything else. Within the first five minutes a tramp’s genitals are exposed by children, a husband and wife have sex and a female servant fondles another servant’s breasts. These prominent images from the start give the impression that Ôshima is out to shock and break the boundaries of what is socially acceptable.

It’s not a typical romance at all. The male lead is a satyr in every aspect of his life and finds it impossible to control himself around women. He also presents himself to Sada in a somewhat pervy way and immediately makes his intentions clear. Sada is an ex-prostitute who releases her inner desires through Kichizo. The negative representation of women as sexual objects at the start is later contrasted with Sada becoming the more dominant lover. Ôshima’s focus on this also makes the film stray away from being a traditional romance at all. They do love each other and nothing else matters to them but their lust. At one point, their constant sex is trivialised by a maid entering the room and plainly stating “Haven’t you noticed the smell?” The film is darkly humorous as well as being very powerful in its delivery. The final scene is certainly unforgettable and makes other art films with unsimulated sex, such as Michael Winterbottom’s ‘9 Songs’, seem weak and tedious.

However, In the Realm of the Senses does have its flaws. It is unclear as to whether the lovers’ antics show a mature or immature relationship. The indistinguishable line between love and lust sometimes makes their passion seem childish and lacking the depth of love. The first half an hour of the film also seems very unromantic and they don’t take their relationship seriously. Sada and Kichizo only kiss a couple of times which also makes their love slightly unbelievable. This could all be part of Ôshima’s intention to shock the audience by also including a storyline where the narrative conventions aren’t in place to satisfy romance fans.

In the Realm of the Senses is a significant film which certainly doesn’t fail to shock. Its powerful finale is not to be missed and could even stir up the sort of reactions seen during screenings of John Waters’ films. The involvement of an egg, a young child and an elderly lady in the film is probably enough to offend numerous people. Having said this, the film is more artistic than anything John Waters has produced and is more than just stylised pornography. Testing the social norms usually makes for an interesting watch and Ôshima certainly delivers. Even for the non-artistic type, it’s worth seeing just for the ending.