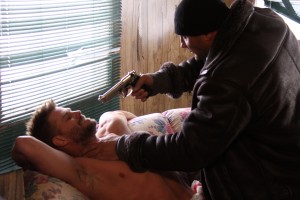 Six-time WWE world champ David Batista is proving he’s also a heavyweight outside of the ring, as he stars in this action thriller House of the Rising Sun.

The latest straight-to-DVD release from Momentum Pictures features Batista as the crooked ex-cop turned ex-con Ray, who’s on the straight and narrow after battling a criminal past.

With his felonious days firmly behind him, Ray’s beefy build naturally lends him to his next job as doorman at the illicit mafia-owned club The Rising Sun. But staying out of trouble proves problematic after a violent shooting breaks out, leaving Ray framed for the murder of a young man.

Locked in as the target suspect, the disgraced vice cop fights to clear his name and prove his innocence, when all the odds are stacked against him.

This gripping thriller has all the right ingredients to be our 2012 favourite. Not only does the lean, mean, fighting machine Batista take us on a tempestuous ride full of crooks and cops but the action replicates New Orleans street-life with vivid authenticity. Chuck Hustmyre deserves major recognition for his perfectly-assembled dialogue, after adapting the screenplay from his own novel under the 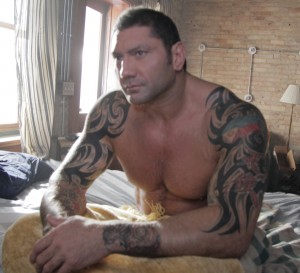 The film may not have felt the success of the cinematic release, but it doesn’t take away from David Batista’s undeniable ability.
Nurturing his title as the longest-reigning WWE world heavyweight champion, Batista had a point to prove when taking on this role. Many have famously taken their skills of stage-sports entertaining to big-screen Hollywood but fallen just short of the mark. Yet watching the action unravel in this Brian A. Miller directed drama, it somehow tears down our misguided assumptions, as Batista delivers Ray with gritty realism and manages to make that tricky transition from wrestler to actor seemingly effortless.

House of Rising Sun is out on DVD and Blu-ray from 2nd April.