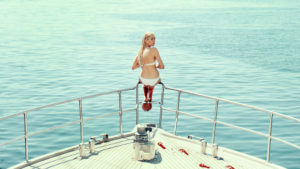 Within three minutes of Isabella Eklöf HOLIDAY, that wakes you to the horrors that will unfold later in the film. You see HOLIDAY is a challenge to watch and to unpack but it tips you off early and never draws back the veil of complacency. Sascha (Victoria Carmen Sonne) is the younger girlfriend of drug dealer Michael (Lai Yde). She has been sent on holiday to Turkey, where Michael is staying. 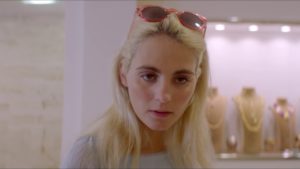 The trophy woman, sent to be the visual depiction of a kingpins success and sexual prowess. Micheal is a cold and monstrous man. Played with an ice cold, clinical air by Yde. He is mixing business with pleasure, Sascha is naive however. She sees the money and the drugs. Sonne layers her performance with the naive, intertwined with fragmented maturity. Meeting two Dutch men, she haphazardly stumbles into friendship. This event leads us to a shocking assault, rape and the collapse of the empire, built on sand.

The film has received much discussion in film circles for this rape scene. A scene that is frank and brutal. One side spoke of its intensity and horror. The other, spoke of the bravery of the BBFC in passing it. My comments are more directed to Isabella Eklöf. She must be commended for the intelligence in direction. Unflinching in its point of view, it never compromises. She is asked pointedly in her piece about the film on the disc. Her answer is unexpected. The frame is passive. Not emotionally vengeful, just the placation of oppression. This adds gravity. It also makes the film that much more harder to swallow. 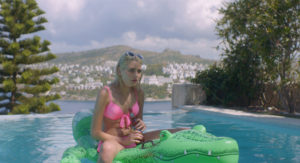