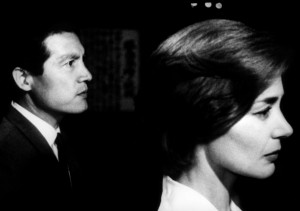 Seeing the past and living in the present. Two people meet under the war damaged sky and the empty land. Elle is a French actress making an anti-war film in Hiroshima. Lui is a Japanese architect. Though rebuilt the land is a shell and its people are living within a time long uncertain. Both are passengers in the world and have lived under much horror. One a Japanese architect and former army solider. He saw death and lived after the bomb came and washed away the land. The other a French woman. She loved the occupied lands occupation agent. A German solider that she being young and in love, fled to and fell for. He was shot by a vengeful hand, she was shaved and demonized. Sent to a dungeon to live like a monster of the past. She did not speak and instead pined for a loved one that was lost to her. 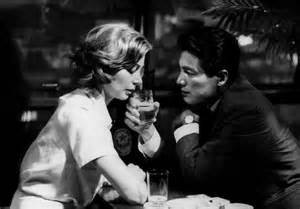 The film that launched the left bank film movement and gave shape to the new wave momentum. There is much here to talk about and much here to explore. Resnais pioneered the break down and reshaping of narrative, space, time and memory. I was less impressed with Last Year in Merinbad. That is a film which smashed apart the framework of reality, replacing it with a shell of image, sound and identity. Hiroshima Mon Amour is different and I fell in love with it. An ode to the way we want to capture our lives and the events that we can only participate in. To speak of such a film is to know that wonders can be captured. 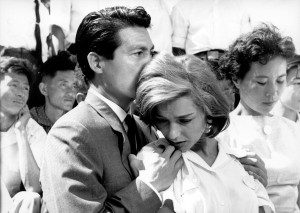 A masterpiece is a weak expression for a film that has so few words but such an impact on those that see it. It tells not only the story of those that have lost everything but also the story of those defeated nations and those defeated people. Nations broken by death, defeat and destruction. Visual balance and composition define the space. Forming the world as a barrier of thought. Images flow and the remembrance of horrors jar us to see and take in. Emmanuelle Riva gives a performance of measure and tone. She makes the cross from emotional being to art object. Riva is a woman vulnerable and fragile. Okada is exceptional as the counter point to her fragility. Memory is his real interest in world ruptured and broken. He is the dynamic opposite and the way similarity crosses all cultures. Loss is in the connective tissue of this film and think of it like this, an architect that lives in a world after the wasteland was created. He has ‘rebuilt’ himself as he has the country. She is an actress that has played a role to hide what she was. Psychological fragments reveal that the charred external has an underneath much more damaged by the experience of war.

A joy from start to finish and the DVD is plain but the film needs little to add to its brilliance. This is art and cinema that the New wave had something to say and did it very, very well.